The Royals are bad, the Rangers are good. The results could be beautiful.

The hellish run of good-to-great teams the Rangers have had to play recently hits a short break today as the Rangers take a trip to Kansas City to end the month.

There's not a whole lot riding on this series. The Royals are in the mode the Rangers have been in recent years where the future looks bright and they start calling up pieces of that future in a lost season. It is a chance to possibly gain some ground on the Twins, who face a slightly bigger challenge in the Tigers, but the division is just about over and there are no playoff-preview implications going on here. It's just three games against a very bad team and a chance to see the Rangers play really well, which is always fun.

Oh, and Nelson Cruz is back. He is good. In fact, if it weren't for all his injuries this season, he may well have been the chief competition for Josh Hamilton as the most valuable player in the American League. So there's that.

There seems to be some talk about the "Collapse of Zack Greinke." But, while he hasn't been repeating his 2009 success, he's still been an elite pitcher and easily the best Royal this season. Fortunately, the Rangers don't even have to deal with him this series, so. . .

After that, it's David DeJesus, who is very good, but also very out for the season, leaving Billy Butler as the best Royal the Rangers have to contend with this series. Butler is a good player having as good a season as you could hope for from such a young player, but when he's your best player going, you know why you're bad.

Betemit has actually had a good season, but in a very small sample, taking over third since Alberto Callaspo was traded. 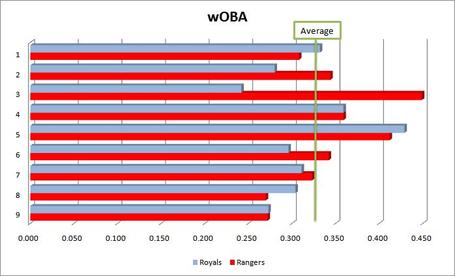 The Royals are better at a few spots, but they're still a very bad offense. The heart of the Rangers' order makes this a huge advantage, especially with Cruz back. From Gordon to Ka'aihue, Rangers pitchers will be facing seven straight spots where all but one hitter has been below average this season, usually by a lot, and the only one above (Blanco?!) is just barely there. Butler is the only person performing very well and doing so in a reliable sample. You handle Butler, you likely handle the Royals' lineup. 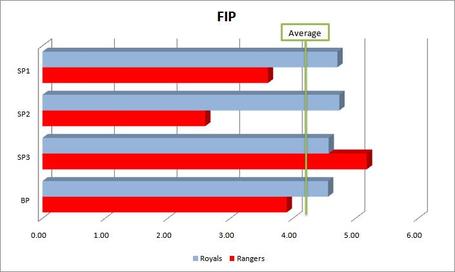 Every single starter the Rangers face this series is bad (and right-handed). Almost every pitcher they could possibly face is bad. They should score many runs as a result. Meanwhile, The Rangers will send out a legit No. 1 pitcher (this year) and follow him with maybe the best pitcher in baseball. And while Tommy Hunter has had a rough stretch lately, for his career, he's still right there with every Royals starter this series, and that's with his home games coming in a park that doesn't like pitchers.

Davies is what you'd think of when you think of a really standard and boring pitcher. He throws a low-90s fastball about 2/3 of the time, occasionally throws a low-80s change and occasionally a high-70s curve. None of those pitches are good and all result in more walks and fewer strikeouts than the average pitcher. And there's a good chance he's actually been playing over his head so far. Yup, 4.71 Fielding Independent ERA and he's probably been lucky.

Sean O'Sullivan we remember from his Angels days. He's like the exact same pitcher as as far as repertoire Davies, with a few more off-speed and breaking balls thrown and a little less velocity. He is pretty good at avoiding walks, but he only strikes out about three guys in an average six-inning appearance. Also, he, too, is probably even worse than that FIP suggests.

Finally, there's Bullington. Bullington has four starts and nine appearances this season. So he hasn't been good, his small sample size is even worse than his career (5.07 FIP), and that's actually boosted by getting to be a reliever for part of it. He throws almost exclusively a low-90s fastball and a slider. He also gets fewer strikeouts and gives out more walks than the average pitcher.

The Royals bullpen is bad, but it's not a complete abomination towards the back end. Soria is one of the best closers in baseball, and Kyle Farnsworth and (of all people) Robinson Tejeda have been at least better than scrubs as set-up guys. Still, the only time the Rangers probably ever have to fear a Royals pitcher this series is when trailing in the 9th inning. That's something that may just never, ever happen. 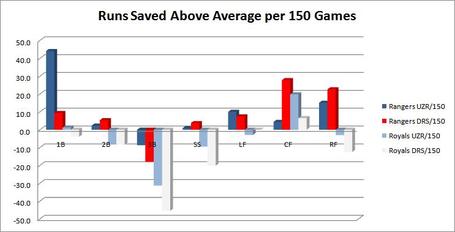 As usual, with defensive metrics, there's a hefty small sample size warning here. Like where it says Mitch Moreland saves more than 40 runs every 150 games. Probably not.

But, this does convey just how bad the Royals have been defensively. The Rangers look better at every single position on this chart, usually comfortably. Even Michael Young! In a very small sample, Gregor Blanco has been above average in both Ultimate Zone Rating and Defensive Runs Saved. Billy Butler has been slightly above average in UZR. After that, every single probable Royals starter this series has been below average in both metrics. In total, the Rangers have an 82 run lead in DRS and a 58 run lead in UZR over the Royals as a team.

If you thought the pitching and hitting disparity was huge, the defensive disparity is humongous. The Royals absolute, positively and completely suck in the field. And I wonder if it's something their front office has a grasp of in terms of value. 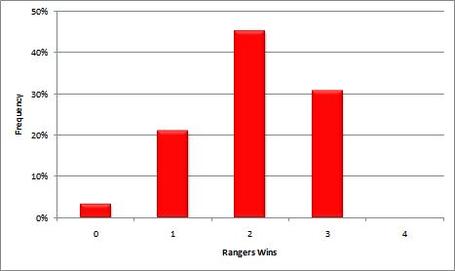 The simulation, unsurprisingly, has the Rangers as heavy favorites, winning the series a little more than three-out-of-four times it's played. Nearly 1/3 of the time, they sweep, which is a massively high number for a sweep. In fact, the Rangers sweep this series way more often than they lose it. I mean, on average, the Rangers are projected to score nearly 17 runs in this series to just over 13 for the Royals, which is a massive lead for a three game stretch.

I like watching the Rangers win, so I'm excited. Sure, the Royals are bad and that's why this series looks so easy, but watching the Rangers pound an opponent is fun no matter who they're playing, and it looks like that's probably going to happen a couple times over the next three days.

Anything less than a series win would be disappointing. In fact, I'd say it will take at least 2-out-of-three to even be okay. You will rarely get closer than this to being okay expecting a sweep. Especially on the road.