But, mostly, this is just another series in a season quickly approaching its twilight. It is, however, baseball. And baseball is fun to watch.

Here's who we're watching the next three days. And, of course, make sure to read Christopher's preview at Lone Star Ball.

Eponymous_coward of Lookout Landing illustrated the Mariners' season a while ago. Click for animation!

The Mariners' risky off-season strategies have backfired in every conceivable way, and a few inconceivable ways, but the problems have largely been new additions and depth. They still have some strong seasons out of their players this season, though mostly from the usual cast of characters.

King Felix and Suzuki at the top is no surprise. Hernandez is, once again, pretty close to the best pitcher in baseball. Suzuki is probably hitting his decline phase, but that's still an All-Star caliber guy. Gutierrez is not repeating the solid offensive season he put up in 2009, and his defense also appears, for whatever reason, to be down from recent seasons; still a good player, just not the great one he had been over recent history.

Lost in the Mariners horrific season, I think, is the strong seasons they've gotten from a couple relatively unknown guys. Vargas and Fister are both having good seasons as starting pitchers, when they're the kind of guys who you expect to fill the back of the rotation. Instead of merely filling out the back, they've pitched more like No. 2-caliber starters this season (even after removing the awesome defense and SafeCo Field). And they do it, by the way, without getting a lot of strikeouts, but by keeping the ball in the zone to avoid walks and be efficient. Sound familiar? Sound like something a former Mariners pitcher has, by all accounts, been teaching some of the Rangers' guys to do?

Unfortunately, the Rangers will have to face all three of these starters. Rough, I know. But I have good news. The guy that would have ranked first on this list, one Cliffton Phifer Lee, will be sitting in the Rangers' dugout, instead of pitching against them. Yay!

This list is derived from FanGraphs' Wins Above Replacement estimates, by the way. Look at that last number as essentially how much a player has contributed in the standings over a scrub call up in his playing time. More info can be had through the link in the glossary at the bottom.

This chart compares both offenses in 2010 by each spot in the lineup (using the player most likely to see most of the series there) using weighted On Base Average. Use it like OPS, but on the scale of On Base Percentage and a little more accurate (check the glossary for more). 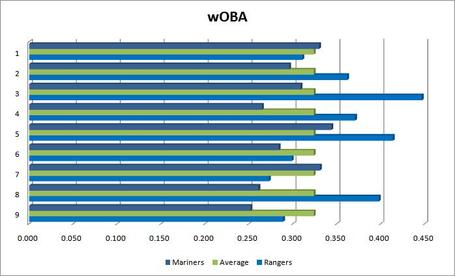 As you can see, this is the image of a really bad offense. The loss of Ian Kinsler creates even more of a black hole towards the back of Texas's line-up, but they still beat the Mariners bloody offensively. The Mariners offense has been the worst in baseball this year, even with the aid of a DH. As a whole, they have been more 102 weighted runs below average (derived by wOBA). That's more than 128 runs behind the Rangers. And this is why the Mariners are so bad despite getting great pitching and disappointing-but-still-good defense: the offense is amazingly bad. Young Michael Saunders, Russell Branyan and Ichiro Suzuki are the only players hitting above average this season, and it's pretty close for them.

Lopez is actually questionable, and his replacement (Matt Tuiasosopo, .186) is even worse. In the interest of conservative predictions, I'm keeping "Lopey," but neither is a big impact on Rangers pitchers.

Also, this is obviously a really small sample for Mitch Moreland. But at least it's gone well, eh? 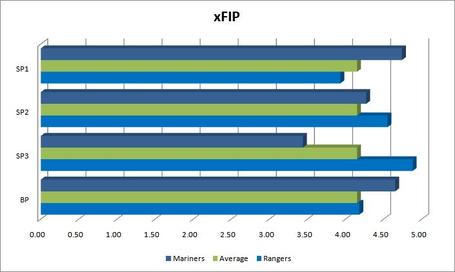 Interesting trend here, as the Rangers' starters get weaker and the Mariners' starters get stronger as the series goes along. These averages are inflated by the ballpark, so game two, as far as the starting pitchers, is pretty even, while Texas is at a decisive advantage in game one and a decisive disadvantage in game three. The Rangers, of course, have beaten King Felix before.

The bullpens aren't too close, as the Rangers are one of the best and the Mariners are one of the worst. And so far in 2010, the bullpen alone makes the difference. Seattle's starting pitching thus far has saved nearly 16 runs more than Texas's starters, but a lot of that came from Cliff Lee, who is obviously now a Ranger. In total, however, Rangers pitchers have saved nearly 23 runs more than the Mariners have, thanks to very different performances from their pens.

The Mariners rotation is very good, and the Rangers will face the best of it this series, but Texas pitching is no slouch, either, and the bullpens likely give Texas the advantage.

Finishing off the team comparisons is the fielding. This graph uses two fielding metrics to estimate how many runs per 150 games each probable starter has saved this season vs. an average fielder. 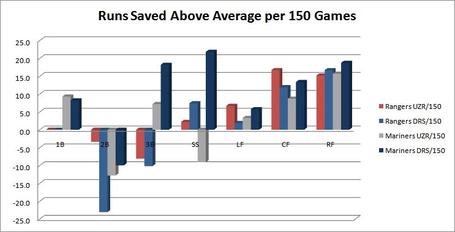 This is where the Mariners might have an advantage, as they've built their team around defense, but this season it's been fairly close. Seattle, as a team in 2010, has a 15 run lead in DRS while the Rangers have an eight run lead in UZR (both are in extreme agreement on Texas but with strong disagreement on Seattle). Both teams have been good by either measurement, however.

Neither outfield lets many balls fall in. In cavernous SafeCo Field, this will be the series where fly balls go to die.

If this is your first time seeing these numbers, by the way, keep in mind this is still a very small sample size for defensive performances. This is less of a measurement of ability and more an estimate of what's happened so far. For instance, you'd probably be smart to bet on Guzman, Andrus and Wilson being better going forward.

Also, I know just about nothing about Mitch Moreland's defense, so I'll be calling it average at first for now.

Okay, so, if we plug these match ups in to a projection (courtesy of Steve Sommer) and give the Mariners the home field advantage, how does this series stack up? 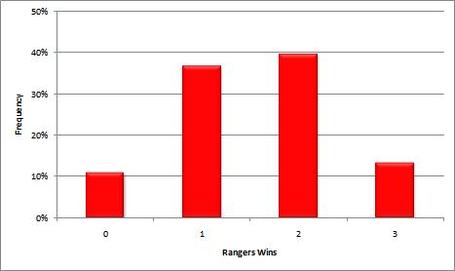 Unsurprisingly, the most common result is probably 2-out-of-3 for the Rangers. However, Felix Hernandez throws a wrench in the works, giving the Mariners one game where they're heavily favored. That obviously doesn't mean it's an automatic loss, but Colby Lewis isn't an automatic win, either.

So what we've got is, despite being the much better team, the Rangers only winning the series just over half the time (52%). The presence of King Felix and playing at home gives the Mariners a decent shot at getting an upset series victory and means they probably only get swept about 13% of the times this series is played.

Unsurprisingly, this is expected to be a low scoring series, with both teams expected to score fewer than 14 total runs.

Similar to the previous series, the Rangers are playing a lesser team, but thanks to match-ups and home field advantage, are no locks to waltz through the games. Also just like the last series, the Rangers have built a comfortable enough lead that a hiccup is no cause for panic. Failing to win at least two in Seattle will be disappointing, but it's something that's very possible and not cause for great concern (particularly if Josh Hamilton doesn't play).