The Rangers face off against the second place Oakland A's for the last time before the final stretch of the season. It's an opportunity to put the division further out of reach, but the Oakland starters will make that tough.

Here we go. One more series against the A's before taking a break from the AL West until the last stretch of the season. These three games will go a long way towards determining if that last stretch even matters.

I think everyone is pretty use to the A's and everyone understands what's at stake here, so I'll save you a long-winded intro, since, if you read this, you probably just want to see the colorful graphs and comparisons. In short, this is probably Oakland's last chance to make a race of the division, but a sweep would still leave the Rangers five and a half games up with 32 games left to play. The Rangers, meanwhile, can lose these games and still be in comfortable position, or they can win them and put the division so far out of reach even the wildest fantasies of Athletics fan(s?) wouldn't be able to come up with a realistic comeback scenario.

Oh, and think about this: as long as the Angels stay back, every Rangers win this series will drop the magic number by two games.

The A's leaderboard remains roughly the same, though in just 54 games Crisp has been amazing. Whether or not he could keep it up would be questionable, but at that pace he'd belong on MVP ballots over a full season.
The pitchers continue to play leap frog over one another. The A's collection of good-but-not-great lefties is fascinating to me, particularly in how closely grouped they are by results but with very different ways of getting them. 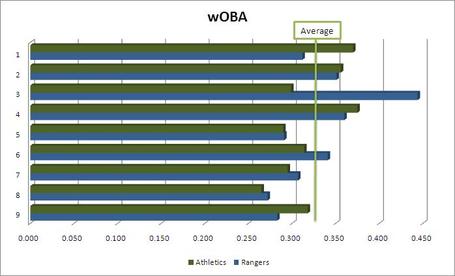 Once again, the A's offense is better than the total runs scored suggests. That offense is brutal, and there's a little bit of bad luck thrown in there, too. It's nothing great, but there are some damage-doers. And when Cantu, Blanco and Molina play regularly, it might even be better than the Rangers.
Bengie Molina at 5th is ugly. This is hopefully the last series of the season that doesn't feature Nelson Cruz.
Also, I just now noticed I made the Rangers green and the A's blue. Sorry about that. As soon as I'm at my own laptop, I will fix it for your aesthetic pleasure. 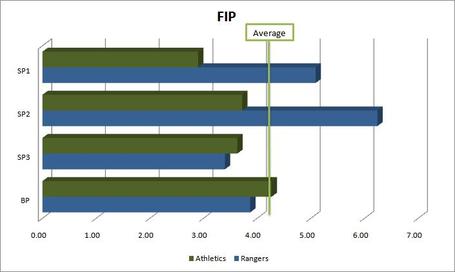 Three straight lefties having high-quality seasons facing a team whose two best righty bats are on the DL. This series could get a little ugly. At least none of them are Trevor Cahill. And at least Colby Lewis gets to start one of them.

The most realistic hope (anything can happen, of course), is probably to hope the Rangers can at least make the A's starters work to get to the bullpen with multiple innings left, and for the pitching and defense to keep the game close in that time. If these teams are within a run or so in the last third of the game and the bullpens coming in, the advantage goes to the Rangers. 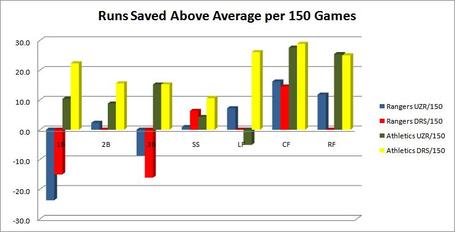 As usual with fielding numbers, there's a small sample size footnote, but this is how the A's are built. They have fielders at every spot who have both good track records and strong reputations, making the numbers they're putting up in the field believable. Maybe not quite to the extent of those giant bars there, but the A's having a better defense than the Rangers is certainly no surprise. Shortstop is really the only position where the Oakland advantage doesn't seem obvious.

Now for the final series simulations using each component. 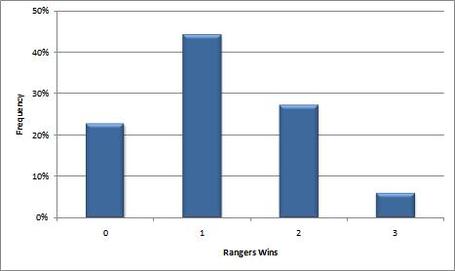 It's probably a bit of a shock to see the A's so heavily favored over a better team on the road, but when you look at the components, it's probably a bit less of a surprise. The A's are sending out a starter every game who's been having a very good season, while the Rangers only have Colby Lewis who can really say that. With Texas starting Jorge Canut -- essentially the week half of the first base platoon -- every game thanks to the constant lefties (and, of course, the lack of Kinsler and Cruz), the offenses are pretty close, and the A's almost certainly have a hefty fielding advantage.

In short, the Rangers are the better team over 162 games, but they don't look like the better team over the next three. Of course, the reason they did a game better than expected in the Twins series was mostly Rich Harden coming out and having one of the best starts of his season. That could happen again, or Hunter could have a good start or one of the A's could just have an off day, or any other number of things could happen and the Rangers could win the series. It happens in the simulation almost exactly 1/3 of the time.

But, don't be too surprised if the A's escape with another series win over the Rangers. More importantly, if the do, don't panic. Health is on the way, escaping with even just one win will still mean at least a 7.5 game lead in the division (and the Magic Number down to at least 25). This series just isn't that big of a deal, and losing it wouldn't be, either.

Hopefully, that 33.3% shows up, though. And hopefully the Twins struggle in Seattle.