The Rangers host the Twins in a matchup of injury-riddled teams fighting for homefield in the first round of the playoffs.

Share All sharing options for: Rangers Have High Hopes For Twins Series

Let's whisk ourselves back to May 30th for a moment. On that day, the Twins won 6-3 to finish a three game sweep of the Rangers. That dropped Texas to 26-24, falling from half a game up to half a game back in the division. It came off of a split with Kansas City and an series loss to the Cubs. It was the low point of the season, before the Rangers won a series against the White Sox and then took two of three from the Rays to begin a memorable run.

Now the Rangers face the Twins yet again, and things are a bit different. Texas is once again in a bit of a skid, with injuries contributing to a sweep at the hands of the Rays and a split against the Orioles. Perhaps this time, the Twins and Rays can switch places, with one playing the roll of sweeper and the other playing the role of starting point of a dominant run.

Of course, there's a difference between then and now. Then, the sweep dropped the Rangers to second place. Now, a four game sweep would only drop them to 3.5 up at worst. There's still something very significant to this series, even if the division looks likely over, however: the battle for homefield in the American League Division Series. The difference between playing the Yankees or the Rays doesn't mean a whole lot, but finishing with a better record than the AL Central champs (which would be the Twins today) likely means playing the lesser team, and every edge helps. To say nothing of the advantage of playing the decisive game at home if it gets that far, and getting to start the series in Arlington.

These aren't season-defining games coming up or anything, but they do have meaningful leverage that hasn't been seen in a series for quite a while. The Twins currently have a 2.5 game lead in the homefield race, so it would take a sweep to take back the lead; three of four would still put the Rangers half a game back.

We start our preview of the biggest Rangers series in a while by looking at the top five Twins in terms of Wins Above Replacement at FanGraphs. This is essentially an estimation of how many extra wins above a fill-in scrub a player has produced for his team in his time played. For any stat you see that you're not familiar with, there's a glossary at the bottom of this post.

Liriano has had some poor luck on hits, this year, but he has been one of the best pitchers in baseball. He certainly deserves more Cy Young conversation than David Price, and is probably the biggest threat to Cliff Lee for best pitcher in the league this season. He's now starting to fully realize all his promise and is hopefully ready to produce this way for a long time. Unfortunately, he's also a lefty, and will be appearing in this series without the threats of Nelson Cruz or Ian Kinsler. He represents, probably, one of the hardest games this season for the Rangers to win.

While the Rangers are hobbled, so are the Twins. Morneau was finally having a season where he deserved the strange MVP hype he always seems to get, but has been sidelined for a while with a concussion and will not be seeing this series. They're also missing solid players in third baseman Nick Punto and starting pitcher Kevin Slowey, and have been missing closer Joe Nathan for the entire season. Unlike the Rangers, however, the Twins have been filling in those injuries with good depth.

Mauer may not be having another all-time great catcher season, but he's still having another elite year on his way towards what seems like an inevitable date with Cooperstown, and I cannot reconcile with the fact that Carl Pavano can apparently still be a very good pitcher. 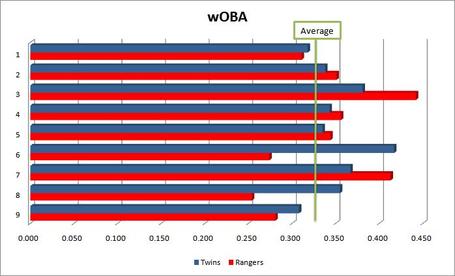 Part two compares the two offenses in the weighted On Base Average from each player in the lineup.

The Twins represent one of the best offenses in baseball, behind only the Yankees in park-adjusted weighted Runs Above Average this season.The Rangers have the slightly better hitters through the heart of the order this series, but the Twins boast above-average hitters through almost the entire order, and even their worst hitters still produce roughly on the level of Elvis Andrus. The Rangers' use of replacementl-level hitters so much at this point in the season is a serious impediment.

Also, mentioned was the difference in the position-player depth in both squads. While the Twins are missing Morneau and Punto, Valencia has replaced Punto with a solid year and the age-defying Thome has been one of the best hitters in baseball as the Twins' DH. The Rangers, meanwhile, have gotten very poor production from the replacements for Kinsler and Cruz.

Also, this chart uses Mitch Moreland as the starting first baseman, partly to show how high his wOBA has jumped; he's been amazing his rookie year. But with two lefties going for the Twins, I'll bet the veteran Jorge Cantu (.310) gets at least two starts at first. I'll include that in the final simulation. 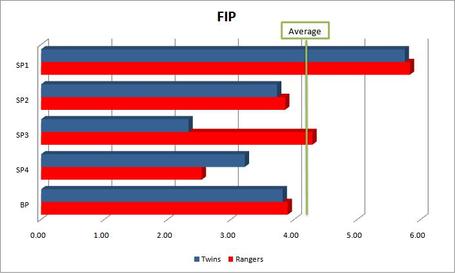 Interesting pitching matchups this series. Each team's worst starter this season starts game one. Every game has the same handedness. The two best pitchers in the AL will start games. There seems to be some confusion on who will start for games three and four for the Twins, but Josh Lewin said Duensing will face Lee, and that's good enough for me.

Both teams have been pretty similar in pitching value this year, and this chart -- which essentially removes the luck on balls in play to give an ERA estimate -- makes the Twins look like they have a bit more advantage than they probably do. To begin with, almost every Rangers' pitcher has had a high number of flyballs leave the park thanks to where they pitch. Also, while Liriano may have the better FIP than Lee, Lee has been the better pitcher thanks to his ability to consistently go deep in games. As far as Duensing, I have trouble believing he's really this good.

What the Twins pitchers do is never, ever walk people. Their starters walk just over two hitters every nine innings. Pavano is actually at an astounding 1.5 this year. Liriano, really, brings the total up with his 2.97 rate, but his K rate makes up for it.

After a good start to his career, Blackburn is just not having a good season at all. He throws nearly 80% fastballs that top out in the low 90s, splitting the rest of the time between his curve and change. He gets them across for strikes, they're just very hittable.

Pavano has apparently resurrected his career in Minnesota, having perhaps the best season of his life so far. He has a wide array of pitches he mixes up without leaning too much on one, primarily low-90s fastballs with a variety of movements, all of which he can get for strikes. His change comes in at around 10 MPH behind his fastballs, but moves at nearly the same speed of his split finger. For a breaking ball, he brings a slider.

Duensing's short career has been primarily as a reliever, which inflates his performance overall a bit. He, too, is a heavy strike thrower relying on a low-90s FB, and also tosses a hard-breaking slider around 1/5 the time. Per FanGraphs, the slider has been one of the best in baseball this year.

Liriano throws a mid-90s two-seam fastball with movement around half the time, and throws a vicious slider nearly 35%. Those two constitute the vast majority of what he throws, and they're good enough he doesn't really need his changeup. 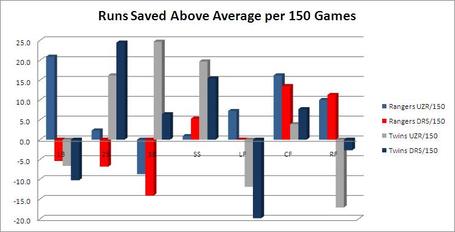 In terms of runs saved per 150 games started, this is how well each starter this series has been playing defensively in the two FanGraphs defensive metrics Defensive Runs Saved and Ultimate Zone Rating. Both teams are very similar, both in totals and in league rank, defensively this season. If you split the difference between the two metrics, the Twins have a roughly 10 run lead (at about 30 runs saved), most of that coming in the difference between the two in DRS totals. Both are good defensive teams, though not quite near the best in baseball. Both are missing players who had been putting together tremendous seasons, Morneau in the Twins' case and Kinsler/Cruz in the Rangers' case.

The Twins' strength is a strong defensive infield, particularly up the middle with Hardy and Hudson. The Rangers' strength is an outfield that covers a ton of ground.

As a note, at first base for the Rangers, this is the split difference between Cantu and Moreland so far. As usual, there are a bunch of small sample size questions here. Overall at this point, though, it should be giving us a decent picture of how the team fields.

If both teams are healthy, the Rangers are probably the slightly better team, but it's really, really close. Playing at home would make Texas the likely favorite in this series if everyone's best was playing, but only slightly. Everyone isn't playing their best, however, so the last part of this preview is plugging each of these matchups (with some regression) in to a simulation provided by Steve Smith to gauge the chances of winning the series. 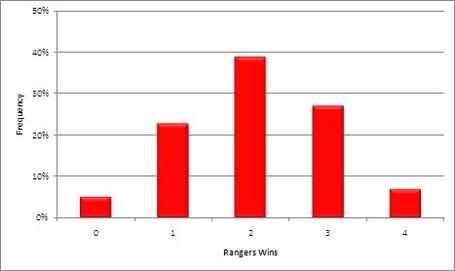 Despite the injuries, despite how well the Twins have played this year, the Rangers still look like the slight favorites in this series.

Overall, the series is extremely close. Each of the first games are a virtual tossup in a neutral setting, but being at home makes the Rangers slight favorites. Game three, provided that is where Liriano gets his start, is a decisive advantage for the Twins, and game four, thanks to Cliff Lee, is a decisive advantage for the Rangers. The total run expectancy (again, in a neutral setting) is also extremely close, favoring the Twins by fewer than .03 runs, with each team coming in at about 20 each.

The most common result, by far, is a split at 38.7%, which is slightly higher than the Rangers' 33.6% chance of winning the series. Neither team gets a sweep often, with the Rangers at around 7% and the Twins at around 5%.

In short, this is pretty close to a coin flip. In four days, the fight for homefield will probably look no different, other than the Rangers running out of time, and there's a slightly better chance it will be closer than than less so. A lot depends on how good Brian Duensing actually is as a starter, probably the most questionable performance in 2010 that weighs heavily on these results. If he's for real, the Twins might be favored here. If he's not, the Rangers might be a little more so.

Expect a split. Only be disappointed with less, and be very happy with any more.