Even banged up and on the road, the Rangers are heavy favorites over the Orioles. But that was the case last time, too.

Just in case you're still smarting after the last three days, look at that number a few more times before continuing on with this preview.

The Rangers just got swept for the first time since the All-Star Break. You may have scrubbed the last sweep from your memory, and if so, I don't blame you. If not, what's about to start today may just terrify you.

In what now seems like a different season, the Orioles managed a dramatic, crushing four-game sweep in Arlington. They hit two-out grand slams off of Neftali Feliz. They slapped around Cliff Lee. They won four games on the road. It was an improbable series, and what's happened since then with the Rangers has only made it more seem more improbable (and inconsequential).

For many, however, that Orioles sweep still looked terrifying. And Baltimore has won 10 of their last 16, the hottest they've been all season as their young players start to mature like they were supposed to before they play another four games against Texas. And the Rangers are playing a whole lot of scrubs instead of the stars they actually had in the last series. And the games are now in Camden Yards. It's frightening to look at these things and worry about what the Rangers could look like in four days.

In other words, the Rangers had better win this.

By the way, Baltimore is now managed by someone named Showalter. Anyone familiar with him?

Luke Scott has just gone nuts since the All-Star Break, putting together a career year. Markakis, on the other hand, has not continued his hot first half. And thank goodness Adam Jones isn't in this division.
Matt Wieters has to be the only catcher who could post a line like that in his second season and be considered a disappointment. While Orioles fans want better, every fan of the Rangers would kill for that.
I'll talk about this more lower, but Brian Matusz needs more attention in the Rookie of the Year talks. 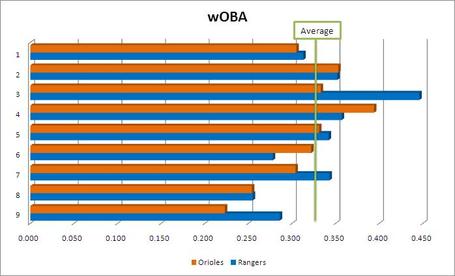 Does that make you think of the Broncos or Gators more? If it's Broncos, are you thinking Denver or Boise State?
The Orioles offense has improved a bit over the course of the season, while the Rangers are obviously missing some pieces, but Texas still compares favorably. The 2-5 spots in the Baltimore order pose some threat, and Roberts can probably be expected to have better results going forward, but only Markakis poses a particularly serious threat. Once you get past Adam Jones, the lineup becomes extremely easy to push around, particularly if Roberts continues to struggle post-injury.
Unfortunately, the Orioles probably look at everything after David Murphy and say the same thing. . . 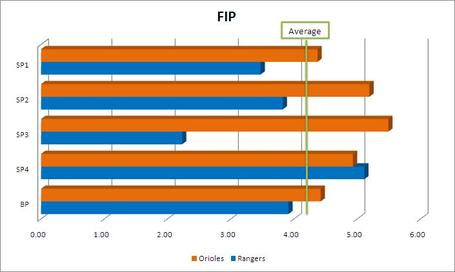 Matusz and Arrieta represent two young pitchers who we're probably going to hear about in the AL often in the future. Matusz is an under-discussed Rookie of the Year candidate having a season anyone should be thrilled with from a rookie pitcher. He's also a lefty, which is terrifying with Kinsler and Cruz both out. He throws mostly a pair of fastballs in the low 90s and relies very heavily on the low 90s change-up. He manages to throw strikes very often, which is probably partly in thanks to having very little movement, even on his curveball.
Arrieta, is not having quite the year of Matusz, but it's still nothing to be ashamed of from a rookie. He fits a pretty standard profile of low 90s fastball, mid 80s change-up, then sliders and curves that he throws roughly equally, and a little more often than the change.
Bergesen is truly awful and represents a game where the Rangers offense should break out, and if not should be very upset with themselves. Bergesen's fastball rarely hits the 90s and he rarely throws a change. His mid-80s slider is his only good pitch per FanGraphs, and he throws it more than 1/4 of the time. He's also down as having a splitter he tosses just over 3% of the time, but it doesn't have very good results. Bergesen, by the way, is exactly average at throwing strikes, and doesn't issue too many walks (compared to everyone not named Cliff Lee), but he also doesn't get many strikeouts.
And then there's good ol' Kevin Millwood. One of the greatest Rangers Pitchers of all time just because the bar is set so low. He started out pretty poorly in Baltimore, but has rebounded to post an almost-mediocre season to date.

If you're paying close attention, you'll notice I've switched from xFIP, what I usually use in the graphs, for FIP. The reason is simply to be more in line with wOBA, which doesn't regress a hitters' production and I've been using for the offensive comparisons. So, from now on, on the pitchers' graph I will be using standard Fielding Independent Pitching that does not regress home run rates, it holds pitchers responsible for all of them. I will still be using regression in the projections, however. If anyone doesn't like this, please let me know. 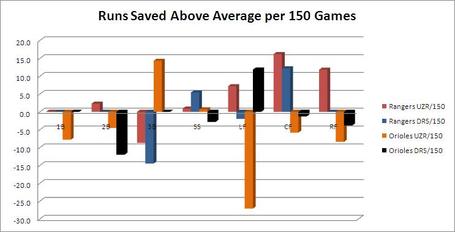 Here's the image of a really bad fielding team and a really good fielding team, even with some of its good players hurt. The Orioles outfield should probably be better (though I contend Adam Jones is overrated), but, so far, it hasn't been too good in 2010.

I continue to wonder what's up with Elvis. While I certainly believe UZR and DRS aren't capturing his talent level this season (nor are they designed to), I'm not going to disagree that he's been disappointing this season. But why I have no clue, because he certainly shows the ability to grab balls few, if any, other shortstops can get to, and the arm is incredible to make the play after. And yet little dribblers that shouldn't go by him, or he picks up a ball and just drops it. Some of it is certainly small sample size stuff, but, for whatever reason, he doesn't seem to be making the most of his ability in the field this year, eye test or stats test.

Now to plug these components in and simulate: 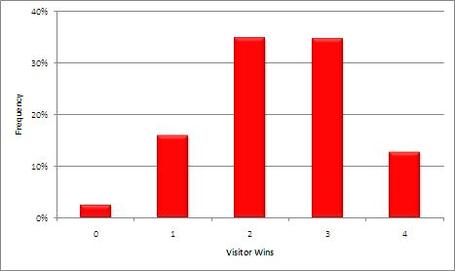 Thanks to a little bit of improvement, a bunch of Rangers injuries, and the games being on the Road, the Orioles have a better shot in this series than the last, but it still heavily favors the Rangers. Texas at least gets a split a whopping 83% of the time, and wins the series almost half the time (just over 48% to be exact). A split is actually the most common event, but by less than a whole percentage point over taking three out of four.

And then there's that 2%. That's the chances of the Orioles taking all four. That would mean beating each of the Rangers' three best pitchers. That would mean taking the final eight straight games in the season series. That would mean panic across Texas fandom. 2% means it's almost a lock to not happen, but last time the chances were even worse and it happened. It's a lesson that anything possible can and eventually will occur.

But it can't happen twice, right?