After using them to begin the turnaround of their season earlier in the year, the Rangers face the Rays for the second time in 2010. And while winning two out of three would be less surprising this time around, it would still be a big deal. 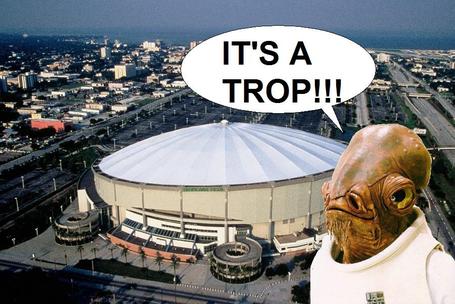 On June 4, the Rangers were three games over .500 and one game in first place. They had just come off of a series win over the White Sox that ended a four game losing streak. They were hosting the Tampa Bay Rays, who looked, at the time, like the best team in baseball. Clinging to that division lead seemed iffy against such a fantastic squad.

Instead, the Rangers won two out of three against the vaunted Rays. They would then lose to Cliff Lee in Seattle, but win that series as well, and head to Milwaukee to begin the best winning streak in Rangers history. Since then, the Rangers have played .610 baseball, have never relinquished their division lead, and are a borderline lock for the playoffs (with Cliff Lee on the squad), and prepared to make their run through history. It is no stretch to say an unexpected series victory over the these very Rays began the Rangers run from a season of competing to being maybe the best Texas Rangers baseball team ever.

The Rangers now face the Rays again, this time in Tampa, and just think of how much has changed since then. At the time, we were rotting for a solid but unspectacular team fighting for the division, a little fearful of being exposed against great teams like Tampa Bay. The Rays are now struggling just to keep a playoff spot, the Rangers are running away with the division, and we are now getting excited about matching up against potential playoff opponents.

Quite a collection of talent. They're not on Josh Hamilton's tier, but Crawford and Longoria have been, unsurprisingly, two of the best players in baseball this season.

Price's ERA and W-L records overrate him a bit, as he's been helped by a good defense and some good luck, but he's still been a fantastic pitcher this year, and his career is off to a great start. If he beats Cliff Lee for the Cy Young without something big changing, though, it will be a travesty.

Zobrist is proving last season was not a fluke. Though he has not quite reproduced his level from last season, he's been a tremendous player. He's also mostly playing second while Carlos Pena is on the DL.

Jaso has to be the best rookie no one is talking about. Has to be. 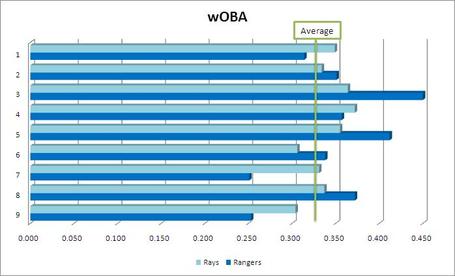 Take this Rays lineup with a massive grain of salt. They mess with the order a lot. Particularly at the top and bottom. They also get a lot of playing time from Sean Rodriguez (.320) at second, Reid Brignac (.303) at second and short and Gabe Kapler (.264) all over the outfield. The Rays haven't used the same defensive lineup in back-to-back games since June 12th, so expect to see a fairly different lineup every game. Each will likely be a small downgrade in offense, however.

I'm also putting some wishful thinking in here and hoping Nelson Cruz is okay to play the series.

As an offense this year, the two teams have been pretty similar in terms of weighted runs created. The Rays have been slightly better, though they'll be missing Carlos Pena for the series. However, the Rangers lack of Ian Kinsler and (possibly) Cruz probably gives the Rays a slight advantage in the series offensively.

Oh, also, if you didn't know, the Rays run. A lot. They have 140 stolen bases, which leads the second place White Sox by 31. That's all of baseball. Have fun, Bengie. 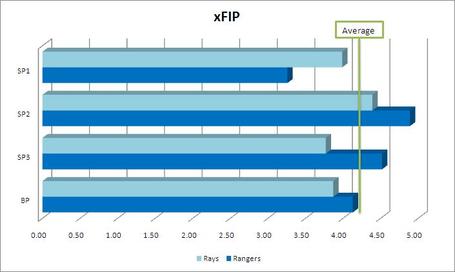 The return of Derek Holland!

Pitching is where the Rays make their names known, and so it comes as no surprise they have the advantage there. Cliff Lee does give the Rangers one game where they have the edge, though.

Also, a note on James Shields. His expected Fielding Independent Pitching puts his ERA 3.77. That normalizes the rate of his home runs that turn in to fly balls, which makes it a more predictive stat, since pitchers don't exercise a whole lot of control over that in a large sample. However, it's something Shields has had a lot of trouble with, as his standard FIP is 4.53; that entire 0.76 run difference is entirely because of the rate Shields's fly balls are leaving the park (his actual ERA is an even huger 5.02). Shields has probably been a bit unlucky this season, and it's probably safe to expect that home run rate to drop. But, it's also possible somehow he's just serving up meatballs this season and he's a lot more hittable than we'd expect looking at this. 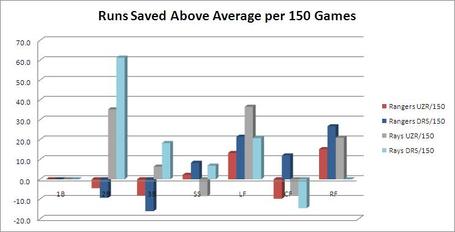 Pitching is what gets talked about, but fielding is where the Rays really shine. They lead the American League in Ultimate Zone Rating by more than 10 runs prevent over the number two team (the Twins, who are 0.6 runs ahead of the Rangers in third place). They are behind the Indians by five runs in Defensive Runs Saved, but the Indians are last in UZR, so I'm going to go ahead and say the Rays are probably better.

The Rangers are a very strong team defensively, but the Rays are close to the best, if not the best, in baseball at turning balls in play to outs. You won't see this often against the Rangers, but this is a massive advantage for the other guys.

A lot of that is evidenced in the chart above. Those who have followed this series know they've never seen a bar like Zobrists's or Crawford's. Zobrist's is certainly largely due to small sample size, but even his career numbers approach that, he is very good at second base. How good over a large sample is the question, but the answer is probably among the best in baseball. Crawford, of course, has been the best defensive corner infielder for a while, and nothing about this season is shocking from him.

The Rays are the better team. They have the better bullpen, the better starter in at least one, likely two, of the games, they have probably the slightly better offense and definitely the much better defense. And, adding the games being in Tropicana Field, it is certainly expected to be their series. By how much, though? 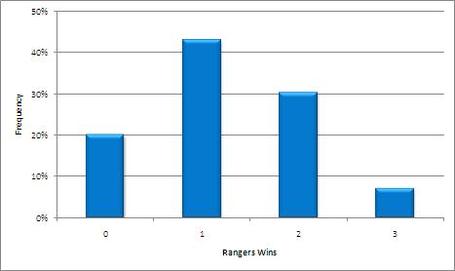 Again, unsurprisingly, the simulations have the Rays taking the series most of the time. Close to 63% of the time. This doesn't, of course, mean the Rangers are that inferior to the Rays. It does mean the Rays have the pitching match-ups, the home field, and do not have to face Ian Kinsler. Fortunately, Cliff Lee does give the Rangers a game with nearly a 50/50 chance of winning, and helps keep the Rangers from getting swept more than 1/5 of the time. Winning one game, at 41%, is by far the most likely outcome. And as far as runs scored, it's actually not a huge difference. Keeping the Rays under 15 would be a success, while the Rangers should probably expect to score at least 14 in the series before being too concerned.

As a quick note, switching Shields's xFIP to his FIP, in other words assuming none of his home runs were bad luck, boosts the Rangers up just 3% to winning 2/5 of the time. That's one of many ways the Rangers can pull closer, however, that is not so difficult to forecast. Others include the likely eventual regression of Zobrist's unreal second base defense and Dan Johnson's incredible small sample size hitting. It would be straying from the cold, objective projection, but I'd venture the Rangers' chances of winning the series are better than a mere 37%, though I would wager they're still sizable underdogs in the series.

The point of these is merely to set expectations, and the expectations here are that the Rangers probably shouldn't win more than one of the next three games. And that, of course, is okay. The Rays are a very good team, and the division is of little concern at this point. The only thing we should be upset with here is a sweep, and even then it's far from the end of the world.

What this means, of course, is that winning this series would be huge. In June, the Rays looked even more intimidating and the Rangers didn't look close to this good, and they won that series, and did so comfortably. It's entirely possible, it's happened before, and it would speak volumes towards how this team will look in the playoffs. This is a possible first round match-up, and could also be a preview of the Championship Series if both teams make it that far. Losing two games doesn't prove the Rangers won't belong come October, but winning two (or three!) would sure send a signal they will.

In some ways, that makes this a fun series going in. Sure, losses are never fun, but the stakes and expectations are low here. We get to watch another great baseball team, we get a preview for the playoffs, and the potential for extremely encouraging wins. I say go in to this series with the right mindset and look forward to fun. And remember that winning one game on the road to start a playoff series is awesome.