The Relationship Between BABIP And WOBA For Josh Hamilton

Share All sharing options for: The Relationship Between BABIP And WOBA For Josh Hamilton

Jack Moore of FanGraphs has continued his "Expanded Four Factors" series to Josh Hamilton. He looks at the components that have gone in to Hamilton's incredible season, and what kind of year he would be having with certain regression.

With a drop in BABIP back to .340, Hamilton’s looking like a .383 wOBA hitter, which is still quite good. Even if it drops all the way back to .300, Hamilton’s still a comfortably above average hitter, at .346. Any BABIP above .360 projects Hamilton as a .400+ wOBA hitter. To be exact, every 10 points of BABIP is worth just over 9 points of wOBA.

What does this tell us? Not much that we didn’t already know, really. First, Hamilton’s having an insanely good year, even though there’s very little chance that he maintains his .440 wOBA. Second, Hamilton’s power and contact skills make him an above average hitter regardless of his BABIP, and even with some regression he should remain on of the better hitting outfielders in the league. Third, it would take some very poor luck to push Hamilton to anywhere near or below average. Hamilton is a very good hitter having a tremendous season, and right now, he certainly looks like a candidate, if not the front runner, for the Most Valuable Player award in the American League.

He also includes this nifty graph displaying the the relationship between Hamilton's Batting Average On Balls In Play and his weighted On Base Average: 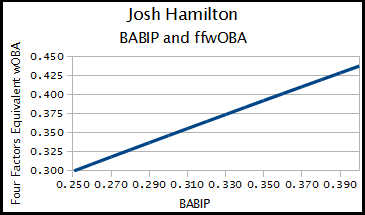 Moore's estimated wOBA for Hamilton with a more realistic BABIP is backed up by another source, as well: StatCorner has his regressed wOBA at .386 currently. Which, like Moore says, is still an absolutely ridiculous total.

Little of this is a surprise, of course. Hamilton is a supremely talented hitter who's finally putting his natural gifts together for an elite season. He is over-performing a bit, but most MVP players do over-perform a bit. What's encouraging is, even with regression towards less spectacular expectations, Josh would still be having an amazing season. As long as we can stay healthy, we don't need him to have terrific balls in play luck to be a phenomenal force that provides extreme production for the team.

As long as he is, though, I'm going to continue enjoying one of the best individual seasons in the history of the Texas Rangers.