Expectations Against The Red Sox

The Rangers' toughest stretch of games this season continues with the Boston Red Sox, but find themselves in the position of favorites for the first time in a long time.

Share All sharing options for: Expectations Against The Red Sox

Another series, another tough team. Not too long ago, the Rangers played the Red Sox and it turned out pretty well. They were a 9th inning semi-failure by Cliff Lee from sweeping four games in Boston. This time, the games are in Arlington. And this time, the Red Sox are even more banged up. In other words: expect good things.

Even with all the injuries they've suffered (I've heard Red Sox fans claim "our DL has a DL"), most probably accept the Red Sox as having had a very good season and they're a franchise that always expects to do so. So, it would probably make you feel pretty good about the Rangers to be told they've got one less win than Boston (66) but also two fewer losses (50) as well as more pythagorean wins (66 to 65). The Texas Rangers so far in 2010 have been about as good as the Boston Red Sox. Let that sink in. Thanks to the difference in divisions, the Rangers currently look at having playoff odds of about 99.2% compared to the 23%. Boy, that would suck.

These are the five most valuable players for the Red Sox this season per FanGraphs.com, put in terms of wins added for Boston above what a scrub call up (like Joaquin Arias) would have done. No.s three and four on this list will not be participating, the former for the rest of the season. If you're interested, the next best after them are John Lackey (2.4) and J.D. Drew (2.3). If there's ever a stat in here that you don't follow, by the way, there's a handy glossary

Getting back to the Red Sox on the Disabled List, here's a list of players who will not be participating in this series:

With two catchers on the DL, of course, that means we're likely to see at least once the man who delivered the game-winning hit on opening day, Jarrod Saltalamacchia, playing for Boston just a few days after being traded. That will be weird.

Also, here's something else weird: Marco Scutaro alrady has 526 plate appearances, 61 more than the next best Red Sock. What?

Here are the two probable batting orders for most of the PAs in this series compared by weighted On Base Average: 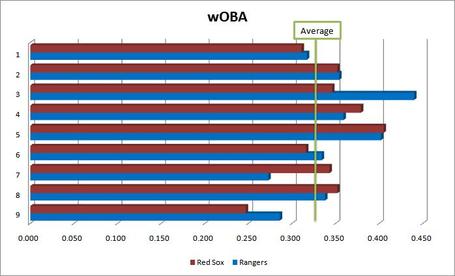 Through the season, the only offenses that have been able to compare to Boston's have been the Yankees and the Twins. This lineup is currently a shadow of its former self, though, with the injuries. Still, it hasn't fallen from potent to bad, it's merely fallen from awesome to being pretty comparable to the Rangers. There is still heart-of-the-order oomph and several more players pitching in strong supporting seasons. The Lowell-Kalish and the Ellsbury-Scutaro tandems are the best opportunities for quick innings and killed rallies. When Salty is inserted in, he likely makes more than half of the lineup inept, giving the Sox the same sort of problem the Rangers have had lately with the Guzmans, Molinas and Andrus's of the order.

Speaking of which, looking only at what's happened this season, David Murphy and Mitch Moreland do a lot for this lineup on paper. Like the Sox with Salty, when Jorge Cantu (or Chris Davis or Justin Smoak) and Julio Borbon are in the lineup, five of the nine spots are taken up by below-average hitters. Moreland and Murphy's performances this year cut that to a more manageable 1/3 of the lineup, and Elvis Andrus is suddenly climbing his way back up.

Now for a comparison of the probable starters and the bullpens in expected Fielding Independent Pitching (essentially expected ERA with the luck and defenses removed). 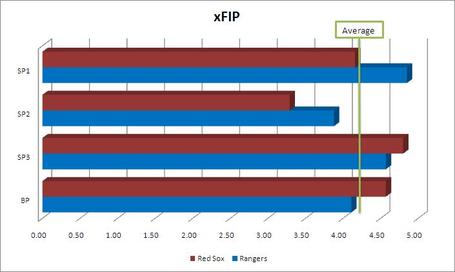 The Red Sox do get the luck of the draw on the pitching match-ups here. Colby Lewis, at least in 2010, is probably the second best pitcher in this series, he just happens to face one of the best pitchers in baseball.

Beckett still gets the same mid-90s velocity on his fastball he always has, but he throws it quite a bit less often this season, only 40% of the time compared to 63% for his career. He instead throws his low-90s cutter much more often (14%) than he has before, as well as a high-80s change (13%) that has been absent for most of his career. And, according to FanGraphs, the cutter has been by far his most effective pitch this season.

Lester also mixes up a large array of pitches, leading with his four-seam mid-90s fastball but, similar to Beckett, only 41% of the time. He supports it with a high 80s cutter, high-70s curve, mid-80s change and occasional two-seam fastball. He has great success with every pitch, and the increased use of his excellent cutter may be playing a part in his growth from merely a really good pitcher to an elite Cy Young-caliber starter. I really don't look forward to facing him.

Matsuzaka is the only of these pitchers who hasn't looked very good this season. He, too, throws a wide array of pitches, with his cutter being his favorite after his standard fastball. Despite poor peripherals, Dice K has actually had good results on all of his pitches outside of his slider.

The Red Sox bullpen has been very bad this season, though it has improved a touch since the last time the Rangers faced them. Daniel Bard is still the only pitcher having a season Texas would be happy to have in their bullpen, but closer Jonathan Papelbon has been regressing towards what we expect from him a bit after a horrible start to the season.

Final comparison is each probable position player in both Defensive Runs Saved and Ultimate Zone Rating per 150 games played. As with all defensive metrics, small sample size wildness applies. 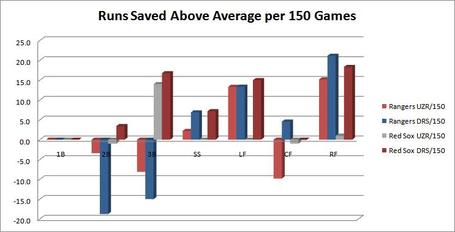 Both teams have put an emphasis on defense, and their are some mixed results on the Red Sox. The Rangers are one of the best in baseball by both UZR and DRS this season (with very similar totals in each), but, as you can see from just the players on the graph, the two metrics disagree wildly on the Red Sox. In UZR this season, they've been a solidly above-average 12.1, well behind the Rangers but still decent. In DRS they've been a horrible 15 runs below average. Bizarre difference and I'd be willing to bet that weirdly shaped ballpark is the reason.

Neither team has the optimal defensive lineup they hoped for originally. Borbon is on the bench for a lack of offense, losing his glove and putting Josh Hamilton in a less-than-ideal position, while Ian Kinsler is on the bench and Cristian Guzman has failed to meet expectations. For the Red Sox, losses of Pedroia, Youkilis and Cameron have been severely damaging.

As an interesting note, this game will feature maybe the best defensive third baseman in baseball against maybe the worst!

For Ellsbury, who have career track records but haven't had much play this season, I'm using their career rates. Ellsbury has a 40.5 UZR/150 in center so far. That would have broken the graph.

Unfortunately, while the Rangers have probably had the better defense this season, the Red Sox probably have the advantage right now if Guzman continues failing at second and if Borbon continues to sit (not that he shouldn't). So now it's time to put those all together in a nifty simulation to see where our expectations should be set. 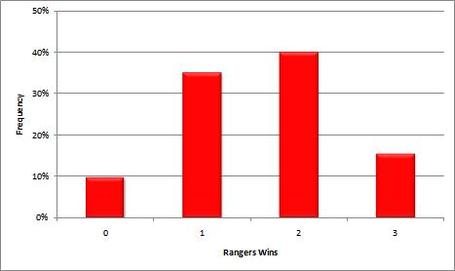 Little surprise here. The Rangers won fairly convincingly in Boston earlier in the year, and that was no surprise at the time, either. The Red Sox won't have to face Cliff Lee or Ian Kinsler this time, but they also have to go on the road and don't have Kevin Youkilis. As a result, this series tilts comfortably towards the Rangers.

The most common result of the simulation is the Rangers taking two of three almost exactly 40% of the time, and they win the series just over 55% of the time. The expected runs scored are actually pretty close, at just over 14 total for both teams, but the Rangers have enough of an advantage combined with home field they should be winning more games here than they lose.

It should go without saying, though, but the Red Sox, injuries and all, are still a very good team. The Rangers are at least on their level at this point, but while losing this series would be upsetting it shouldn't be too surprising. As long as the Magic Number continues to count down, it's not a big deal.

But we are now at a point in baseball history where the Rangers are favorable over the Red Sox and Theo Epstein is still the GM. These are good times.