I thought I would feel better about last night's game in the light of day, and I do, but it still stings. A lot.

And, to tell you the truth, I'm not entirely sure why. Yes, it's a terrible way to lose. Having a 6-1 lead in sixth inning with Cliff Lee striking out 11 Yankees was about as comfortable about a game as you could possibly feel. Using the bullpen so much after having been widely used the night before (Feliz, in particular, having thrown two innings on Tuesday) was concerning and didn't turn out so well, but then the Rangers found a whole new way to crush expectations.

In some ways, the 9th inning had great things to show us. Elvis Andrus got a lead-off triple on Mariano Rivera! Michael Young blooped a ball in to left that was mere inches from falling in for the game-tying single! Something really good (and encouraging) happened, and the only reason the Rangers didn't end up tying it was just the luck of where a shallow fly ball landed.

But, in the end, the Rangers got a runner on third to start the 9th inning and couldn't even force extra innings. It's crushing. It sucks. It happens.

Look at this Win Probability chart: 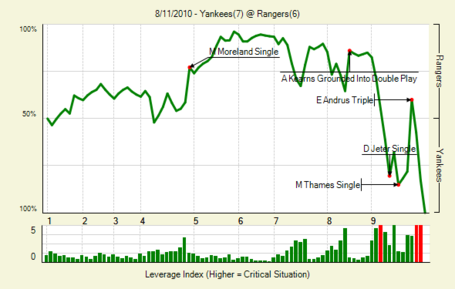 At one point, the Rangers' Win Expectancy was 96.2%. Then Nelson Cruz got thrown out at third the next play. That was certainly a frustrating event, but I don't think anyone assumed it would mark the steady decline to horrible destruction. The chances were still 82.5% to start the 9th before a closer who had already thrown two innings the night before was brought in and showed off no command whatsoever. And, finally, Elvis Andrus managed to pull the odds all the way back up to 60% in the 9th before Austin Kearns dropped them back down in favor of the Yankees.

Of course, the reason that WE in the 6th was only 96.2% instead of 100% is because teams lose this game 4% of the time. The Rangers are due to lose some 4% type games over the course of a season, that's just the way it happens.

And, to be absolutely certain, last night's loss was just a loss. It does not indicate in any way that the Rangers can't challenge the Yankees in the post season; if anything playing a close game with many opportunities to win (and splitting the series) only confirms they can. And it doesn't mean we have to be concerned about the pennant race. The Rangers went a day without lowering their magic number, but they lowered it two games the night before, and 7.5 is still bordering on impossible to blow this late in the season. The result wasn't even surprising at all. Our own simulation here had a split as (by far) the most likely result, and even had the runs scored total for each team at almost exactly nine runs each; this is what should have happened, just not necessarily how you would have wanted it to happen. And, yes, the bullpen failed, but it's an isolated situation no doubt brought on, at least partly, by little rest.

And before anyone starts complaining about Frank Francisco, he's been one of the absolute best relievers in baseball this year, and certainly has a strong track record. He strikes out well more than a batter an inning, only walks one every third inning, and rarely gives up home runs. He is usually money, he just wasn't in the first couple games of the season or last night. Those games hurt but they're not somehow more important than all the other games where he's crushed the opposition. Frankie is great and it's awesome to have someone that good in the bullpen. Go ahead and be mad at him over this series, just don't act like he's not almost always good.

And yet, somehow I tell myself all these things, about how there were good signs and there's nothing to worry about and, objectively, things are okay, but I still feel worse over that loss than just about any other this season. Perhaps it's the failure in such a high-profile game, I don't know. I should feel better about this, but I still feel horrible and hate the fact that today is an off day.

But, at the very least, I can say all the reasons I shouldn't feel horrible and they'll eventually sink in, right?