Expectations Against The Yankees

Thanks to pitching match-ups, the Rangers have more than a good chance at winning a couple games against the best team in baseball.

Share All sharing options for: Expectations Against The Yankees

Today is the first game in probably the roughest stretch of games the Rangers will play all season. Nine of the next 16 games are against teams that lead either their division or the Wild Card, another three are against probably the best team that would be on the the outside looking in, and the last four are on the road against the last team to sweep the Rangers this season.

The silver lining of all these difficult games is getting to look at them as potential playoff match-ups, seeing how the Rangers size up against the October competition. That starts with the only playoff opponent the Rangers have ever known.

I'm sure most reading this are aware that all three times the Rangers have made the post season, their opponent was the New York Yankees, and after winning the first game in 1996, they lost the next nine. In the two sweeps, they managed just a single run in each. And, of course, the pinstripes marched to a world title all three times.

If the season ended today, the Rangers would actually not be playing the Yankees, they'd instead host the Rays. It's close, however. The Yankees have a slim 1.5 game lead on the Rays, and that's the difference between them having home field advantage and having to open the playoffs in Arlington as things stand now. It's entirely possible that after 10 years of missing out on the post season, they Rangers could still need to finally beat the Yankees just to advance for the first time ever.

This is a two game series, which are always bizarre to me and you never learn much from them. But sit back and think about these like the first two games of a five game series in Arlington. Only the pitchers probably aren't who you'd get in the actual games. And also TBS isn't calling them, but that's a good thing. Unless you really like hearing the word "fisted."

Oh, and remember to check out Christopher's preview at Lone Star Ball. He's funnier than me.

These are the top five Yankees in FanGraphs.com's "Wins Above Replacement" valuation. This essentially looks at how much -- offensively and defensively -- a player has added to his over what a scrub at his position would have in the same playing time, in terms of wins. If this is your first time or if you see any stats through this preview you're not familiar with, there is a handy glossary of helpful links attached at the bottom.

Cano is playing like a man possessed this season. The only person in baseball with a bigger WAR than him has been the Rangers' own Josh Hamilton (and even then it's close). After that, it's a little strange to see Nick Swisher 2nd. While he is having a good season, I think it helps highlight something about the Yankees season this year: they're not getting many elite seasons from their players. Instead, they have a whole lot of guys having solid years at worst (12 players have already been worth at least 1.4 wins). What makes the Yankees great this season isn't a bunch of performances that should challenge awards ballots, instead it's remarkable depth.

As a note, Mr. Teixeira will not be playing today and may not be playing tomorrow, due to the birth of his child. These comparisons and projections will assume he will be missing the series. The Yankees will just have to make due with Lance Berkman. Sad.

Now let's compare each team in the three factors of baseball.

First off, offense using weighted On Base Average. This is basically like OPS, but a little more accurate and scaled to look like OBP (and including base running). This is each spot in the likely batting order for the two games for each team. 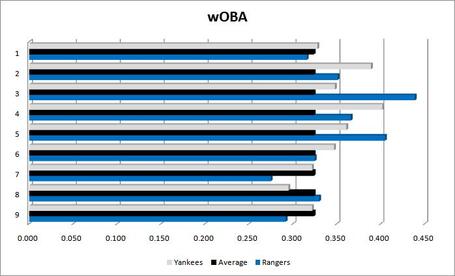 There's a little bit of guess work here. I'm betting for the opener Posada, who's caught in three straight, will get a semi-break at DH, putting Cervelli at catcher. I think there's also a good chance that goes for game two if Teixeira doesn't play. If not, Marcus Thames (.372 wOBA) probably DHs and hits 9th.

I'm also not sure if we're done seeing Julio Borbon play, and the Rangers seem to be playing the hot hand. Until he's back to starting, I'm going to guess David Murphy (and his 40 points better of wOBA) gets the start.

On the season, the Yankees have been the best offense in baseball. The counting form of their wOBA (weighted Runs Above Average) has been 89 runs above average this season after park adjustment, a staggering 67 runs better than the Rangers (who are still a good offensive team). Both teams are missing a key player this series who's helped reach those totals, so there's little doubt the Yankees have a sizable scoring advantage in this series. If the Rangers are going to win in ways outside of good luck, it's going to have to come in other match-ups.

Next up, each game's starting pitcher (and the bullpens) in expected Fielding Independent Pitching. Look at this as basically a pitchers' ERA with the defensive support and the good or bad luck neutralized. 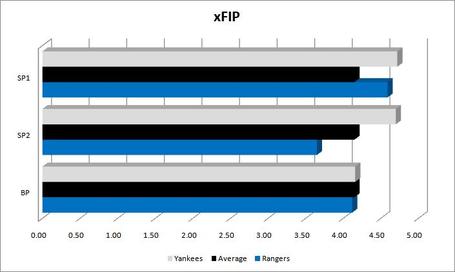 The Rangers have been the better staff, both in the pen and the rotation, all season. And the Rangers now have Cliff Lee.

The Yankees will be throwing out their two worst starters this season. Burnett has just seemed lost this season, and Vazquez may just be completely unable to pitch in New York. Both have had good careers, but they're not having good seasons.

The Rangers counter with two of their best starters, including maybe the best pitcher in baseball these days. This is a huge advantage for Texas.

The bullpens are pretty similar, both in overall performance and depth. The Rangers are a little deeper, but the Yankees have Mariano Rivera, who is as dominant as ever. Joba Chamberlain is also having a very good season, despite all the flak he gets.

This may not completely make up for the offensive disadvantage, but it goes a long way, and we have one more factor to look at.

For fielding, we're comparing each starter in Defensive Runs Saved and Ultimate Zone Rating, pro-rated to 150 games played, in 2010. If this is your first time seeing them, they're basically metrics from FanGraphs that use game charting to compare a player to average at his position in terms of runs saved defensively. It's worth noting that 100 or so games is a very small sample for defensive data, so this is more a representation of what's happened so far in the season than skill. 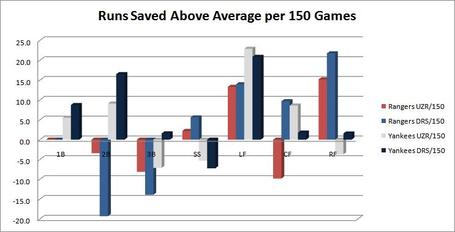 Both teams are good at getting the ball, but the Rangers, as a team, actually have the edge on the Yankees this season. However, the line-up seen in this series does not favor the Rangers, instead these Yankees are saving ~0.16 runs a game more than the Rangers. That's primarily thanks to Guzman replacing Kinsler and projecting Hamilton in center, where he is quite a bit worse than in left, and putting Borbon's Gold Glove-caliber season on the bench (though Murphy is a strong left fielder). That said, Guzman and Andrus are both likely better at their positions going forward than their 2010 performance so far would indicate, and, even without Kinsler and Borbon, the Rangers can probably expect a wash defensively against the Yankees, if not a slight edge, this series.

The last thing to do is take all these match-ups and use them to get an expectation from these two games. I can do that by plugging each element in to a simulation tool provided by Steve Sommer, which also includes home field advantage. 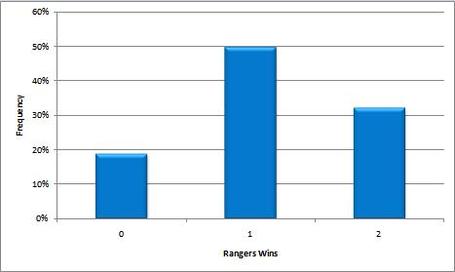 Oh the power of superior starting pitching (and home field). Here we've got the Rangers managing a split at least half the time and taking both games 32% of the time. That leaves them getting swept at just 18%.

And remember when I mentioned the middle infield probably being better going forward? Just for an example, simply regressing Andrus to his career rates and putting Guzman at average raises the Rangers' odds of sweeping to 34%, while keeping the chances of a split the same.

This is the Rangers' chance to put their stamp on a playoff team and tell them they'll be for real in October. And beating good teams, even when they should, is a great way to demoralize those teams clinging for dear life in the AL West race, as well.

It may be thanks to helpful timing on match-ups, but won't it be nice if the Rangers play to expectations and let the October practice start off well? And regardless of how, wouldn't it feel good to win a game or two against the best team in baseball?

I think so. As always, go Rangers.