Expectations Against In Anaheim

Share All sharing options for: Expectations Against In Anaheim

Some brevity here, since, you know, we just had this series. There are some differences, of course. Jorge Cantu may be at first for the Rangers, and, if not, it's Mitch Moreland. Ian Kinsler won't be playing. And, rather significantly, the Angels found themselves another ace. It's also on the road.

Still, while all these things make a significant difference over a season, they're not likely to make a big difference in a short series. So all the things said here pretty much apply. You know the Angels, you know what to expect and you know who their players are. However, we can quickly size up the pitching match-ups and expected results.

Oh, I just thought of one more difference: the Angels are just about out of the race now. Even getting swept would leave the Rangers with a sizable lead. So there's that. I think that's good. 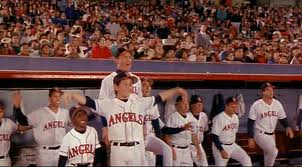 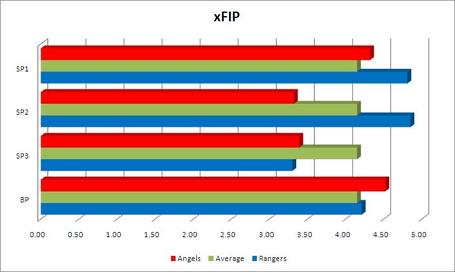 Haren and Weaver back-to-back poses a serious obstacle, and not one the Rangers have had to deal with against the Angels yet (obviously). Lee and Weaver present a great match-up for the second time, this time with Lee having the slight edge in xFIP. That, actually, is the only game in which the Rangers starter has the edge.

The Rangers' bullpen is still better, particularly in the highly-leveraged starters.

Also, the pushing back of Scott Feldman leads some to believe Rich Harden may be getting that start. Meaning who knows what we're getting in game two. 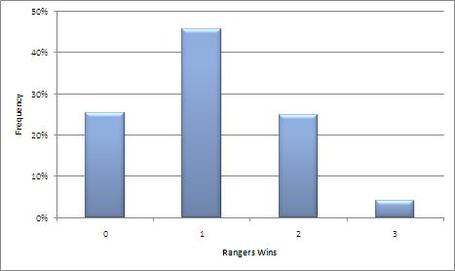 I don't actually feel that confident in all this just due to how many questions there are in this series. How healthy is Haren after being hit the other day? How well will he transition to the AL? Who starts for the Rangers in game two and how effective will he be? And both rosters are going through a lot of changes, which make even the every day players hard to really predict.

But, going with my best guesses at everything, here's what we've got. The Angels are huge favorites. Really, that's no surprise, and while I'm not too confident in the degree, I do believe the Angels should win this series. Jered Weaver is fantastic, Dan Haren is fantastic (don't let the poor luck and very hitter-friendly park fool you this year). Cliff Lee is fantastic, but he only gets to start one game. And while Tommy Hunter has been good, Ervin Santana is probably just a little bit better. And home field advantage is a real thing.

Fortunately, the Rangers have a huge advantage on offense and in the field, and this has them winning the series nearly 1/3rd of the time. But, most importantly, they still manage to get at least a win in more than 75% of the trials. Merely getting a win is okay. The Rangers are better than the Angels and there is no doubt about that at this point, the pitching match-ups just favor them in these three games. Getting just a single win would still mean eight games up on them and at least 6.5 up on Oakland, and it would drop the magic number at least a game.

It's actually pretty funny. We were previewing an Angels series just eight days ago, and it was a big one. Barely more than a week later, and this series isn't nearly as big. It is probably the toughest Angels series all season, but the Rangers have played so well in the previous ones, it's also the least significant.