Expectations Against The Athletics

Setting our expectations against the Oakland Athletics in yet another chance to build a commanding lead in the AL West.

Share All sharing options for: Expectations Against The Athletics

It's a little strange how the complexion of this series rode a little bit on a game that involved neither team. By losing to the Red Sox last night, the Angels made sure the Rangers will be playing the second place team in the West for the second straight series.

LA is officially no longer Texas's closest competition for the division. Unofficially, they may not have been for a little bit longer than just the past 12+ hours. The Angels' notorious "luck" has been the only think keeping them ahead of the A's, who have the better pythagorean record (51 wins to 49), second order record (pythag using Baseball Prospectus's Equivilent Runs formula, 51 to 45) and third order record (adjusted for schedule, 51-47). Texas and Oakland have both been winning at roughly the pace you'd expect from their performance, but strength of schedule has made the lead about three wins better than it probably would be at this point with a more balanced schedule.

In short, things are getting pretty comfortable in the AL West race after a series win over the Angels, but it's not time to rest yet. The A's are still very much within striking distance, and could make up ground in this series if Texas isn't careful. And this is a team that's won nine of its last 11 and has played the Rangers even thus far in 2010.

If you believe in the concept of a "trap series," this is the kind of situation you'd look at.

These rankings use Wins Above Replacement from FanGraphs as their basis. As usual, you'll find a glossary at the bottom for any terms unfamiliar to you, but this is basically an assessment of value added in the standings over a fill-in scrub.

Barton is having a sneaky good year. He's a well above-average hitter and a good fielder at first. What has gotten attention are his 11 sac bunts. You think Elvis Andrus (the only player ahead of Barton) is bad? At least he's not a middle-of-the-order-caliber hitter with power.

Did you know that Pennington now leads AL shortstops in WAR, thanks to Alex Gonzalez leaving for the NL? Did you know anything about Kevin Kouzmanoff other than he has a unique name? Did you know Dallas Braden is from the 209? 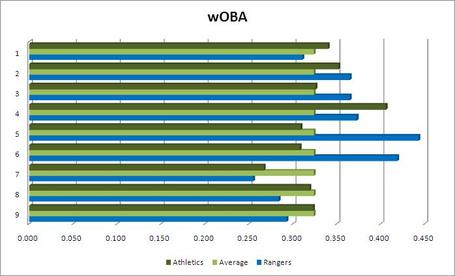 This is a snapshot comparison of how the starters for both teams are hitting, based on likely spot in the order and Weighted On Base Average (use it like OPS on an OBP scale, but better).

Surprisingly, Oakland, despite having a below-average offense this season, wins at five of the nine positions. The heart of the order, however, is no contest and contributes to the total offense not being close at all. The Rangers have issues at the back of the order, but so does Oakland. Cust has had himself a nice season, better even than Vlad (by rate), but in only 52 games.

It should be pointed out this is not park adjusted. Oakland suppresses offense even more than Texas boosts it. Even after adjusting for the park, however, the Athletics' offense (by wOBA) should be expected to be nearly 40 runs behind Texas on the season.

Not shown here is Adam Rosales (.324), who pretty much defines "super utility." Despite not being the expected starter at any spot, he may well appear in every game. He's played 73 games this season, appearing at every infield position and left field. He also runs after every home run, which somehow manages to annoy me. I really don't know why. 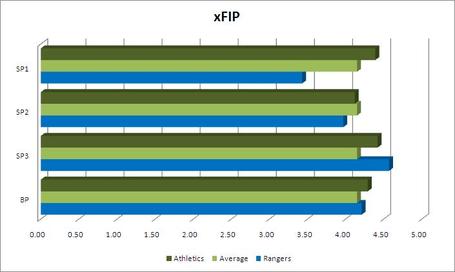 This chart compares each games starters, and the bullpens, in 2010 with Expected Fielding Independent Pitching. Put simply: what you could probably expect a pitcher's ERA to be based on the skills he's shown the most control over.

Despite being their All-Star, Cahill has almost certainly not been the A's best pitcher this season. That title belongs to perfect game thrower Dallas Braden, who the Rangers will fortunately not face this series. Cahill has not been much, if any, better than Gonzalez, either, and both have been pretty much mediocre starters this season.

Gonzalez is a young lefty, which is always a scary thing against this team. He gets plenty of strikeouts, but also surrenders a ton of walks. Cahill, on the other hand, is what you might call a "pitch to contact" type, with few strikeouts but also few walks. Different approaches, but pretty similar value.

Mazzaro has honestly not been much worse than either this season, but in only 10 starts, and he's something of an unknown. By this chart, in fact, his start represents (slightly) the only edge in starting pitchers the A's will have. It's worth noting, however, that this, like wOBA above, is not park adjusted. The difference in pitching in Texas vs. pitching in Oakland at least closes the gap if it doesn't give C.J. Wilson the edge. Mazzaro also doesn't go very deep in to his games, averaging fewer than four innings per start.

These are two of the best bullpens in baseball, and, for both teams, getting to the starters is a premium. The Rangers are fortunate to go in to this series throwing out their three best pitchers, so Texas has the better shot of doing that. The Oakland bullpen is deeper than Texas top-to-bottom, and not quite as strong in the late innings, but the A's do a good job of giving their most important innings to their best pitchers, and Andrew Bailey and Brad Ziegler are absolutely no slouches. 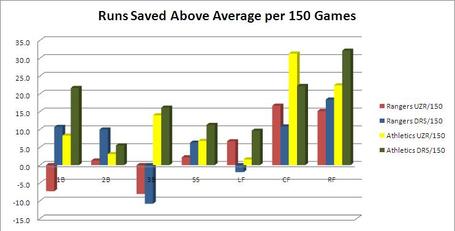 One last comparison of the teams, this time in defense. UZR is Ultimate Zone Rating and DRS and Defensive Runs Saved. Both are similar defensive metrics with explanations in the glossary at the bottom. For this, each player's 2010 season is pro-rated to a 150 game pace. There are a lot of sample size issues here, so this is more of a look at what's happened than a dependable estimate of talent.

This is what the A's do well, though. They catch the ball. They have been well above average as a team this season by both measures, and their DRS total is third in baseball and nearly double the (still very good ) Rangers. Many guys on that chart haven't played many games at the listed positions, but they also have strong defensive reputations to back up their performances so far.

The Rangers have the better hitting and pitching, but this is the rare team where Texas is probably not better in the field.

Rosales, by the way, has an above-average UZR at second, third and left this season.

Okay. Two teams who, performance wise, haven't been really far apart this year, though Texas has been better. The Rangers have the edge in two of the three factors of winning. The games are in Arlington. The teams have split 3-3 this season.

So what should we expect? Given the hitters who will be getting the bulk of the playing time, the pitchers who will be starting, the bullpen and the defensive performances thus far, the distribution of wins between these two teams should look something like this over three games: 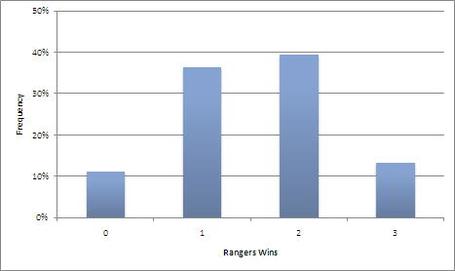 Close series. Unsurprising, but probably a little too close for comfort.

Using the 2010 performances so far, the Rangers should probably win this series a little half of the time it's played, with two wins coming 39% of the time and a sweep just over 13% of the time.

There are some noteworthy reasons for things being so close. The biggest is that the Athletics' peripherals -- things like walk and line drive rates -- suggest the offense has been getting a bit unlucky, and the ballpark certainly holds them back. To a lesser extent, the Rangers' offense is the opposite story. And, more importantly, the performances of Bengie Molina and Chris Davis in 2010 so far, as well as serious slumps from Vladimir Guerrero and Elvis Andrus, don't bode well for Texas continuing the rate the offense has scored at all year. A huge offensive decline is unlikely, but without either dramatic turnarounds at a few spots in the order, the Rangers are probably going to be scoring less often than we've become accustomed to in the future.

There are some reasons to be distrustful of Oakland projecting quite as good as this suggests, particularly from performances over small sample sizes, especially in defense (the biggest difference between the two teams). With the factors going in to this, I would say Texas, at home, has a little bit better a chance of winning the series than this suggests, but not much. The fact is, the Rangers are probably slightly worse than their record indicates, while Oakland is probably slightly better. While only slight, that makes a 7 1/2 game difference smaller. And while Texas is certainly at least a handful of games better than Oakland over 162 games, it's not so much that Oakland doesn't have more than a puncher's chance in a three game set.

The A's aren't an easy win, let alone an easy sweep. While getting only a win out of this series would be disappointing, it's most likely nothing to be too upset about. What's important is that the Rangers have played so well after the break and built such a lead that even dropping a series against Oakland is far from crushing. Texas can afford to drop games, and while you never want that to happen, this is a situation where it would be okay, even against a division opponent.

Of course, the other side of that is that getting a win here would be big, even if it's probably expected. And getting a sweep would be absolutely massive. It would further bury yet another team, it would be a fantastically encouraging sign for what this team can do, and it would be very much more than reasonable expectations. Oh, and it would probably set up a third straight series against a second place team afterwards.