Expectations Against The Angels

The Angels are five games back of the Rangers and have a chance to make the division close, while Texas has a chance to put it away. How do the teams stack up and where should our expectations be going in?

Share All sharing options for: Expectations Against The Angels

The big series go on the front page.

On the heels of a fantastic 5-2 road trip, the Rangers welcome the team trying to rob them of their "It's Time" dreams, the Los Angeles Angels of Anaheim. The next four days represent more than a fourth of the remaining games against the Angels, and how much the rest end up mattering hinges a lot on what happens right now. On Sunday night, the Rangers might have almost completely buried the Angels, squandered a comfortable lead or anything in between.

Though we've seen LAA enough to be pretty familiar with them, it's worth a refresher to see how the two teams stack up. And, of course, there's a pitcher going for Texas that wasn't around last time.

For anyone not familiar with these previews (or any who need a refresher), these are the best Angels so far in 2010 per FanGraphs' stat Wins Above Replacement, which attempts to value how much a players' performance has added to a teams record above what a roster-filling scrub would have done in the same playing time. To compare to the Rangers leader board, you can click here.

Weaver stands out, and if you haven't noticed, his season has been fantastic. He's somehow (even he doesn't have an explanation) become an astounding strikeout pitcher and a very serious Cy Young candidate.

Hunter has done a better job of earning his contract so far than I think most expected, even without his defense living up to the hype, while Napoli has filled in fine at first base for the injured Kendry Morales (though Jeff Mathis, his replacement at catcher, has been pretty horrible). Piniero has been something of a revelation, but he is fortunately not scheduled to pitch this series. Santana is.

The chart below compares the offenses so far by Weighted On Base Average (you can find a linked explanation below, but look at it like OBP that includes power and base-running). Each spot is represented by the player likely to get the most time there in the series. 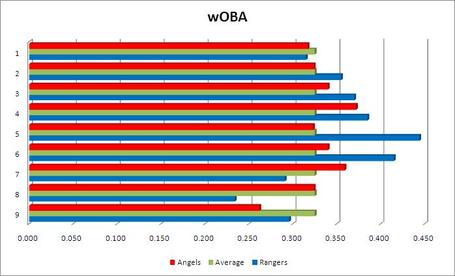 The pathetic performance put up by the bottom of the Rangers' order keeps them from topping the Angels at every spot, though Mathis does find a way to make Julio Borbon look like a good hitter. The heart of the orders, however, are not even close.

Thus far in 2010, the Angels have been one of the worst offenses in the American League. Their team park-adjusted Weighted Runs Created (a counting version of wOBA) has been well below average, and more than thirty runs behind the Rangers so far.

They offer some solid hitters in the middle, but the only guys approaching scary have been Hunter and Napoli. By the same token, there aren't too many spots of especially easy outs, but the total package is just not intimidating.

Same idea for the pitching, this time comparing each game's scheduled starter by Expected Fielding Independent Pitching. Once again, there's a linked explanation at the bottom, but this is essentially what a pitchers' ERA is likely to be given their performance in repeatable skills in front of an average defense. Obviously if it's like ERA, the lower the better. 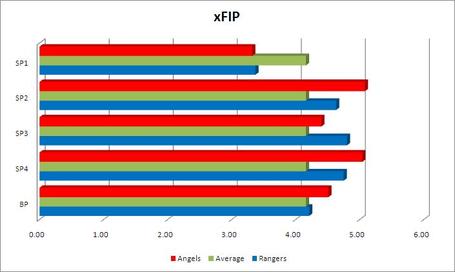 Believe it or not, Weaver may be pitching better than even Cliff Lee right now. Lee has done a better job of keeping his fly balls in the park, but Safe Co (and luck) helps with that. Lee's efficiency has put Weaver to shame, however, throwing almost as many innings in five fewer starts. His ability to stay in the zone without getting hurt lets him go deeper than most starters in baseball, and when two guys are this close, that creates major separation in terms of value. Regardless, what that first set of bars should suggest to you is that today's game is a pitching matchup of epic proportions.

The rest of the series is less exciting, with the Rangers throwing out guys who have been roughly middle-of-the-order good at best, while the Angels have another very strong starter going in Santana, giving them the probable starter advantage in game three.

O'Sullivan has pitched all of one game this season (a solid start against the Yankees), so for this I'll be using his career numbers. Which is still a pretty small sample. That makes, from the starters, one tossup, one Angels advantage and two Rangers advantages.

The bullpen also favors the Rangers, who have been one of the best in baseball, over the Angels, who have merely been above average. But while the LA bullpen has been solid, they have a distinct weakness from the back end. Of the three pitchers getting (by far) the most important innings, only Kevin Jepsen has been good in 2010, while Fernando Rodney has been passable at best. And closer Brian Fuentes has been absolutely awful. Going in to the late innings trailing the Angels is certainly no death sentence; there's always a chance.

This is more speculative, but since it is important to winning, here's a look at the defenses thus far (by the players likely to get the most innings), using Ultimate Zone Rating and Defensive Runs Saved above (or below) average per 150 games played. This is extremely prone to sample size issues, and so is more a picture of what's happened so far rather than a strong evaluation of fielding talent. 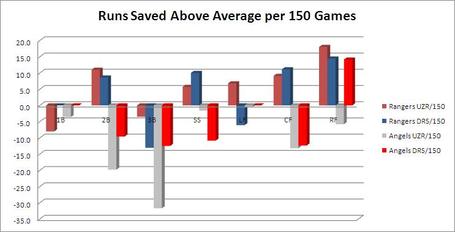 This is a pretty straightforward one. The Rangers help their pitchers while the Angels hurt theirs.

The better team in all three factors, the better starter in at least half the games, and homefield advantage. This series stacks up very well for Texas, and the opportunity to step on the LAA throats looks pretty good.

We can plug all these factors in to a projection tool provided by Steve Sommer to get an idea of how this series is likely to shake out. 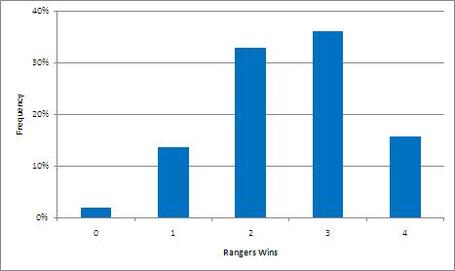 Anything less than a split would be pretty crushing. Fortunately, that's not likely to happen. In fact , this has the Rangers winning three as the most likely outcome. Texas comes out here winning the series more than half (52 percent) of the time, and losing less than 1/5 (16 percent) of the time. Getting at least a split and treading water happens in almost exactly 1/3 of the matchups.

Being held to fewer than 21 runs should be considered a disappointment, as should allowing any more than 18, and the Rangers go in to each game -- even against Jered Weaver and Ervin Santana -- with ~60 percent chance of winning or better.

Take a minute and think about what that means going forward. If the Rangers meet the expectations put forth here, they come out of the series at least seven games up, if not nine. A seven game lead with ~11 weeks to go is not insurmountable, but would still be extremely comfortable for Texas. A nine game lead would mean if the Rangers merely kept pace with the Angels in non-head-to-head games, they'd need to only win a couple games against LAA the rest of the way to still take the division. In other words, the Rangers can put this race just about out of reach and start planning for October by the end of this week if things go well.

It's stressful to deal with a pennant race, but when you look at it that way, the pressure is absolutely on the Angels. Even if the Rangers somehow manage just one win, the lead is still three games. Less comfortable than five, but not yet time for panic. And that appears to be a pretty unlikely outcome for a team that has now exceeded expectations in back-to-back series on the road.

The Rangers are prohibitive favorites in the series, and the only thing outside of the usual "anything can happen" refrain that puts the Angels as having a shot is. . . they're the Angels. Rational or not, they're a team that always seems to do better than expected. I'm not necessarily comfortable declaring the Rangers more likely to win the series than not, just for that reason, but winning is more likely than losing. Texas, for once, is just simply better in almost every facet of the game than Anaheim. That's why they can lose this series and still be in strong position, and why they have a chance to go ahead and practically put things away before July is even over.

Of course, all the evidence the Rangers should win three or four of these games isn't really going to make everyone warm and comfortable until the games are actually won, but at least this is some boost of confidence.