Expectations Against The White Sox

Share All sharing options for: Expectations Against The White Sox 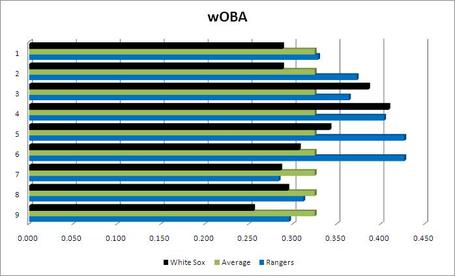 The White Sox have had been playing Dayan Viciedo off and on, inluding the last two days, and having Vizquel on the bench or resting Ramirez. I can't find anything saying what they'll do this series, so I just went with Vizquel since he's been better and has more than 20 PAs. Viciedo's wOBA has been .279, and wouldn't likely make much of a difference in the offense. When Viciedo plays, he tends to bat 8th and Ramirez hits second. 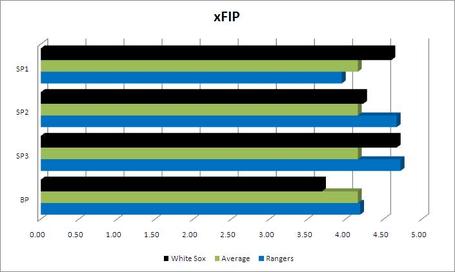 Not often the Rangers will face a better bullpen. This series, they face a much better pen. On the other hand, it's hard to face the White Sox and maybe have the advantage in starting pitchers, but the Rangers have a sizable advantage in game one and pretty much a push in game 3. Too bad there are two lefthanders. 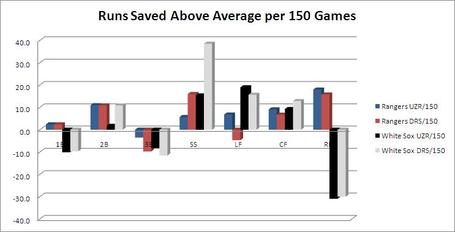 DRS and UZR are in disagreement on the Sox, with UZR thinking they're absolute butchers and DRS thinking they're almost as good as the Rangers. The main difference seems to be how they see the middle infield. We can all agree that Carlos Quentin would be better off as a DH, though. 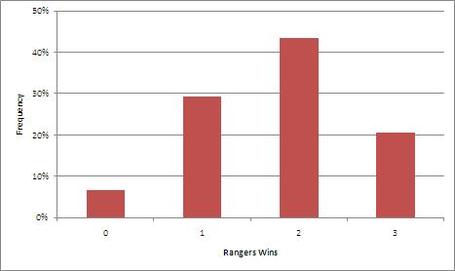 The Rangers are installed as favorites in every series, ranging from 56-64% per game. The expected runs for the Rangers come out at around 16 scored over the series and around 14 allowed.

The Rangers are the better team, and, at home, the better team should win the series. Anything less would be the first real disappointment Texas has had in a while. As you can see, the Sommer projection has the Rangers winning the series 64% of the time, with two out of three being the most common outcome by a lot.

As always, anything can happen, but this shouldn't be too frightening a series. And, as always, Go Rangers.