Nothing like coming off a spectacular series and heading in to a stadium where you've lost 11 in a row.

I have too much fear of a series in Comerica Park to really write much about it. It doesn't help that I just realized the Tigers are better than I've been giving them credit for. 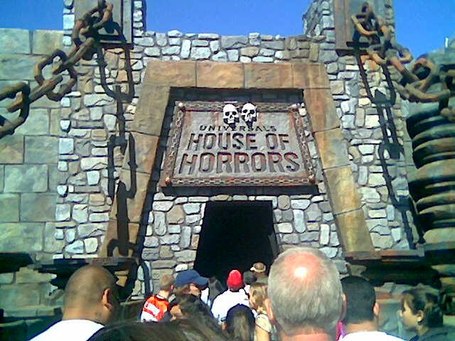 Fans filing in to Comerica Park.

FanGraphs' Top Five Tigers In 2010 In Wins Above Replacement

For those who need an introduction or a refresher, WAR is simply a value estimate from FanGraphs looking at how many wins better a player makes his team than they would be with essentially a scrub barely good enough to belong at the MLB level getting his playing time.

The usual suspects at the top of the list, but then 4th and 5th are both rookies, and both having far better seasons than you can usually expect from a rookie. Jackson isn't too much of a surprise, but who other than Tigers fans had ever heard of Brennan Boesch? Getting that much production from players in their first seasons has to be an incredible feeling. 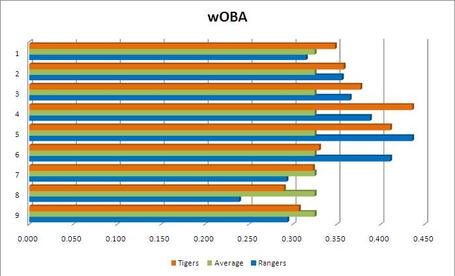 Quite a gauntlet to run. This compares each spot in the lineup (by probable starter for most of the series) in Weighted On Base Average between the teams, and the Tigers have the advantage at most spots. And that's without adjusting for the ballpark.

By park-adjusted Weighted Runs Above Average (derived from wOBA) this season, the Tigers offense has been a little better than the Rangers (30.2 to 25.3). And it's produced with a very deep lineup just like Texas, with a good hitter at almost every spot, and the very back of the order being the only relief. Cabrera himself has just about matched Josh Hamilton in both triple crown stats and wOBA. Picture how awesome Hamilton is to watch hit; we get to watch someone hit like that against us this series. Frightening. 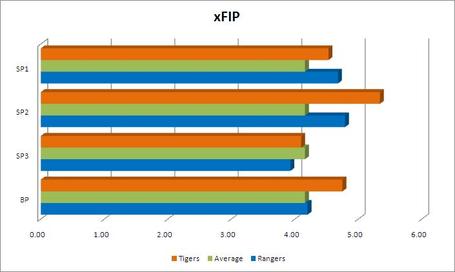 This compares the starters by regressing their repeatable peripheral skills to look at what their ERA would probably be in a neutral situation with neutral luck and neutral defense. And, so far in 2010, the Rangers have the better starter in two of three games and the much better bullpen. Bonderman has been surprisingly good this season.

Before his injury, Joel Zumaya had been maybe the best reliever in the American League this season and really propped up the Detroit pen. That bullpen total is from the Tigers entire season, so the disparity between the two units is probably even larger in this series. Phil Coke and Jose Valverde have been solid, but that's about it. 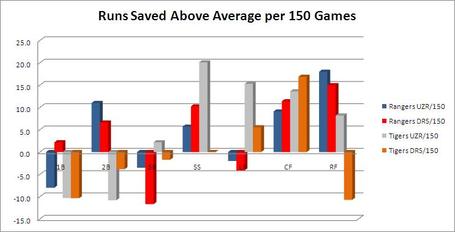 To compare the fielding, we're using Ultimate Zone Rating and Defensive Runs Saved (or Plus/Minus) per 150 games played. Both are simply measures of how often a fielder makes a play vs. the average at the position with a run value (explanations in the glossary below).

This is the first spot where the Rangers seem to have an advantage, though, again, it's close. The only position, however, where the Tigers have a player who has both a strong reputation and a good performance by both metrics is centerfield with Austin Jackson.

We can take these components and put them together to see what will usually happen with these matchups in a three game series. (For the offense, I'll be going from wOBA to a regressed version that uses batted ball rates instead of simply results to date.) 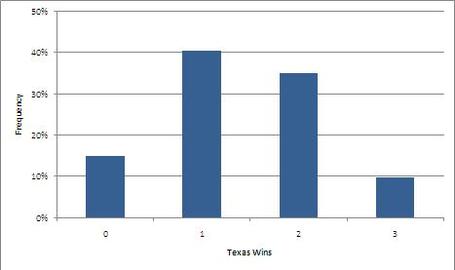 Not a lost cause, but the Rangers only win this series around 45% of the time. Or, in other words, not favored.

This is a game between two very similar teams. The Rangers are probably slightly better, but only slightly, and they have to play on the road. Both teams can probably look at scoring about 14 runs in this series. Holding the Tigers to less should be considered a success, as should scoring more. That's a toss up in a neutral setting, but, unfortunately, it's not a neutral setting.

Texas should probably expect to get at least one win, but another set of two or three losses in Detroit is likely. And it's not just because it's a horrible place for Texas; it's because Detroit is a good team and teams have an advantage when they play at home.

In any case, go Rangers.