Today is pretty much the slowest day of the year for baseball fans. A whole day without a single game. In a way, though, I like the break. After the way July began, having a few days where I didn't have to stress about the Rangers' possible collapse was welcome.

If you want something baseball related, though, here's a preview of the first series after the break to fill your day. Unfortunately, it's not a pushover team like the Orioles (ha!), so if you need another stress-free day, bookmark and comeback tomorrow. 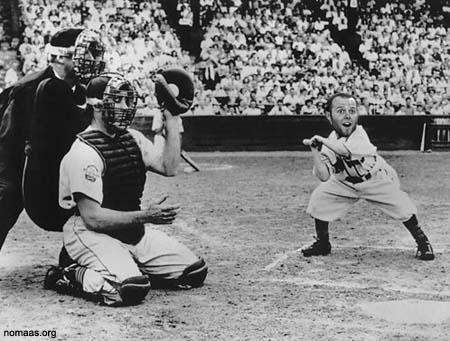 The Red Sox are no worse than the third-best team in baseball schedule andB aseball Prospectus's talent adjusted standings have them as a true talent 53-win team to this point, which is behind only the Yankees. You don't really have to be told this. They're good. Winning on the road is hard. This is a scary series, though at least that means the expectations don't have to be very high.

The Red Sox are actually pretty banged up, so the Rangers may be playing them at the right time (they're just 4-5 in July). Beltre is hobbled, but probable. Pedroia is out. Both starting catchers are out. Mike Lowell is out. Jeremy Hermida is out. Mike Cameron is questionable. Clay Buchholz is out. Josh Beckett is out. Boston is certainly formidable with injuries, but they drag them down to the Rangers level at best.

For reference, by the way, Josh Hamilton is the only Ranger that would make this list. He'd top it, though. Colby Lewis, Ian Kinsler, Vladimir Guerrero, Michael Young and Nelson Cruz would all be close, meanwhile.

Gustavo Molina, by the way, is getting the back-up time at catcher right now. He is not related to the other Molinas. JFYI. Also, if Cameron is out, it would seem Daniel Nava (.371 wOBA, SSS) gets the playing time. 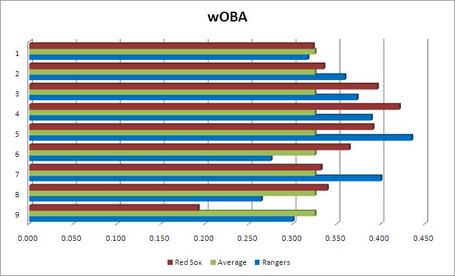 Switching Smoak for Davis and the recent slump really hurts the Rangers chart a ton. But, even then, the injured Red Sox don't wipe the floor with Texas offensively, and Texas has a clear advantage at a few spots in the order. On the season, though, the Red Sox offense has been better than three times as effective as the Rangers (and that's with a park adjustment). The Rangers offense has been good in 2010, but the Red Sox make it look like little league.

By the way, don't ever let a Red Sox fan talk to you about what a hitters park Texas is. Over the last several years, Fenway has inflated offensive production far more than RBiA has. To the tune of 6 percent for LHB and 5 percent for RHB vs. Arlington's 3 percent and 7 percent respectively, in fact. Fenway is a launching pad, but any time someone looks at Dustin Pedroia's performance, it doesn't have to be coupled with "in that incredible hitters' park there in Boston." 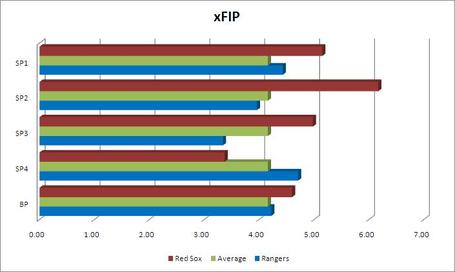 Boy does entering Cliff Lee on that graph feel good! Did you know he's now averaging more than eight innings per start?!

Wakefield, of course, is a knuckleballer, Lester throws hard and has a cutter and Lackey lives off of solid location and a nasty curve. Doubront is a lefty with all of two starts in the majors, so he'll destroy Texas.

The Rangers pitching has been about as valuable as the Red Sox in 2010, but, thanks to injury and thanks to the Rangers trading for one of the only pitchers who's been better than Jon Lester, Texas has a decisive pitching advantage this series (at least from 2010 data so far). There's a wild card in an unknown rookie and a knuckler, but the Rangers have the better 2010 starter in each of the first three games by a lot.

Meanwhile, the Red Sox bullpen has been horrific. Daniel Bard is the one and only reliever who has been better than replacement for Boston this year. Eight different Rangers would qualify as the second best relief WAR in Boston this season, with the Big Four all challenging Bard for the best. Only the Tigers have managed to pitch worse in relief and still contend. I say this for a lot of series, but it's more true here than usual: if the Rangers' starters can keep games close and go six innings, the Rangers have a definitive advantage at the end of games. 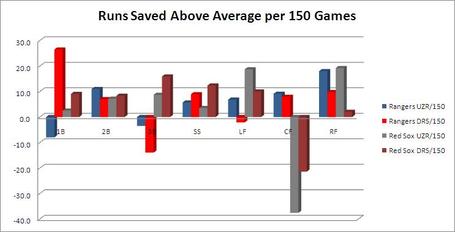 Two teams that have put a recent emphasis on building with defense, and here's how it's worked out for them so far. On the season, the results favor the Rangers by ~10 runs saved so far, depending on what stat you want to use (but they're both close). Third base and left field is the only spot where the Red Sox seem to have a clear advantage on the graph, save for one thing: I used McDonald's rightfield performance because his left field sample is so small. I don't need to tell you playing left in Fenway is a different sort of monster.

Other than small sample size, I'm not sure what's up with Mike Cameron this year. 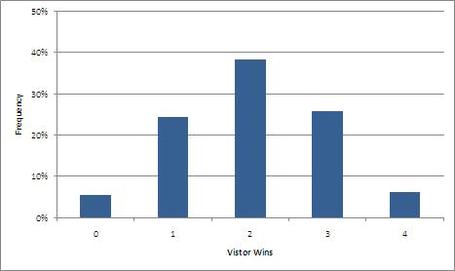 The best projection I've got says, in fact: yes. Barely. It actually says this is a coin flip. The most likely result here is a split at 38.3 percent of the time, with the Rangers having a microscopically better shot at winning three and four.

Once again, the recent slump and the switch from Smoak to Davis downgrades the Rangers' offensive expectations a bit from where they were a while ago. Though, with injuries, the expected per-game average is only about 1/5 of a run behind Boston's current lineup (by wOBAr), and the addition of Cliff Lee obviously helps a ton. Enough, in fact, that the Rangers could probably be expected to at least match the Red Sox with these lineups at about 19 runs scored for each over the series.

A coin flip is a coin flip, but in this case, I think it feels good. Going into Boston and winning only one of four is not a crushing blow. Meanwhile, there's a really good chance of doing better than that, which would just be awesome. Starting the break by splitting (or, dare I say, winning?) a series on the road against one of the best baseball has to offer would not only be good for the standings, it would be a confidence boost for us as fans and go a little way towards replacing that sweep.

Also, while we're looking at projections in a series against the Red Sox, think about this: This is the kind of team the Rangers will probably face in the first round if they make the playoffs. This should be your example the Rangers have at least shot of doing something in the postseason. The Red Sox aren't an automatic win, even with four games in Boston, as the addition of Cliff Lee makes it a coin flip. In the playoffs, it would likely be three games in Texas instead of four on the road. The gap between the Rangers and the best teams in baseball isn't so huge that they can't be at least slightly favored in a short series with three games at home. Just something to consider.