If you buy something from an SB Nation link, Vox Media may earn a commission. See our ethics statement.

Share All sharing options for: World Cup Preview, Pt. 3 - Groups A and B

So, we're a couple of days away from the World Cup kicking off in South Africa.  I acknowledge that there's no way to wax poetic about the popularity of soccer on a site read by (primarily) Americans without sounding condescending to some.  I'll just point out that 5.6 billion people tuned into matches across 54 global markets, and an average of 93 million people watched each match.  It's kind of a big deal.

This will be a series of previews for each group (two at a time) with a more detailed analysis on the teams that are expected to contend.  The problem with the World Cup is that formations and squad selections for some teams are shrouded in secrecy, so I may end up being quite off by the time June 11th rolls around.

We continue with Groups A and B.

Note:  For all who aren't familiar with soccer in Africa, those horrifically annoying horns are called Vuvuzelas.  They're a local tradition at soccer games and I'm pretty sure they'll be linked to 50% of the murders committed worldwide between June 11th and July 11th. 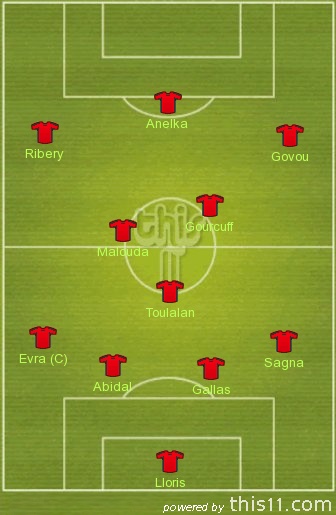 Strengths:  Individually, France is one of the most talented teams in the tournament.  The good news for the team is that Domenech has finally thought up a starting XI that utilizes the immense group of talent at his disposal.  Instead of sticking by the aging Theirry Henry or bizarrely playing Andre-Pierre Gignac, he now favors Anelka as a lone striker with Ribery and Govou on the flanks.  Ribery was overshadowed at Bayern by Arjen Robben this last season, but he's still one of the elite wingers in world football, and is always dangerous in international competitions.  Lassana Diarra's withdrawal has led to Florent Malouda replacing him, an offense-for-defense replacement that forces Malouda to play in an unfamiliar position.  However, the creative abilities of Malouda and Gourcuff in midfield should provide France with tremendous depth in attack.  France also features a couple of the better fullbacks in the competition in Patrice Evra and Bacary Sagna.  You will frequently see Toulalan drop into defense, allowing both of them to bomb forward.

Weaknesses:  The big concern is Malouda being played completely out of position.  Domenech is asking him to pick up the ball much deeper than he's accustomed to and to distribute from the middle.  With Malouda's replacement of Diarra, France loses physicality and a ball-winner.  In addition, having two offensively-oriented players like Malouda and Gourcuff, along with fullbacks who frequently make runs forward, could hang Toulalan out to dry...especially during counter-attacks (it will become apparently obvious why this matters later).  Their defensive pairing of Abidal-Gallas is uber-experienced, but prone to moments of insanity.  Finally, you have Raymond Domenech.  Put simply, he's certifiably insane.  Between his reluctance to pick scorpios (in the Astrology sense) in his squad, his proposal to his girlfriend immediately after being eliminated in the groups stages of Euro 2008, and his general inability to get the best out of the immense talent at his disposal, he's a man most French supporters will be glad to see the back of once Laurent Blanc takes over after the competition. 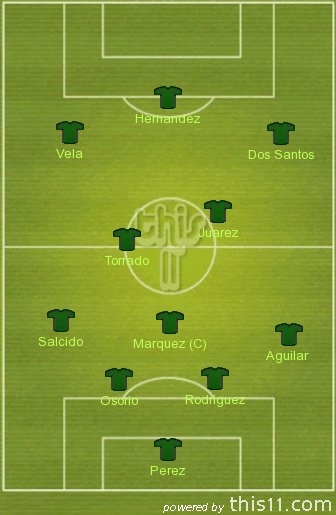 If you've read the other previews I've done, you've seen me write about fluidity in attack:  The ability for players to be interchangeable positionally.  This Mexico side takes this to the extreme.  Assuming they start Javier "Chicharito" Hernandez, the front 3 of Vela/Hernandez/Dos Santos is completely interchangeable, with each player able to play anywhere along the front line.  This trio also gives Mexico extreme pace, making them extremely dangerous when counter-attacking (see France's weaknesses).

Both fullbacks (Salcido and Aguilar) have the ability to push forward.  Because of this, Mexico's ability to hold steady in defense is dependent on Rafa Marquez, who plays as a holding midfielder who drops back into a centerback role as needed.

In my predicted lineup, they're lacking size up front.  If Aguirre decides to use Franco instead of Chicharito, they lose some of the interchangeability and mobility.  They're also error prone defensively, which was evidenced during their games with the Netherlands and England. 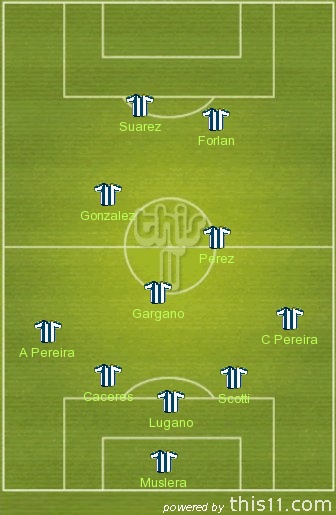 Uruguay features the prolific strike partnership of Luis Suarez and Diego Forlan.  The duo scored a total of 92 goals in all competitions for Ajax and Atletico Madrid respectively.  As a result, both are coming into the tournament in scintillating form.  Although they employ a 3-5-2, Uruguay plays much more defensively than you would think.  Their wing backs push forward with frequency, as you would imagine, but Walter Gargano is a holding midfielder, and Diego Perez tends to stay back too.  This results in a Uruguay side that has no problem sitting back and absorbing pressure, but also hitting out on the counter-attack with Gonzalez being the creative link to Suarez and Forlan.

This team is solidly built.  There are no household names until you get to the two strikers, but it's a well organized team.  Caceres is supremely talented but didn't play much after being loaned to Juventus, so he goes into the tournament a little bit rusty.  Of course, the lack of true game changers (aside from the strikers) and a willingness to defend in numbers could result in a situation where the strikers become isolated. 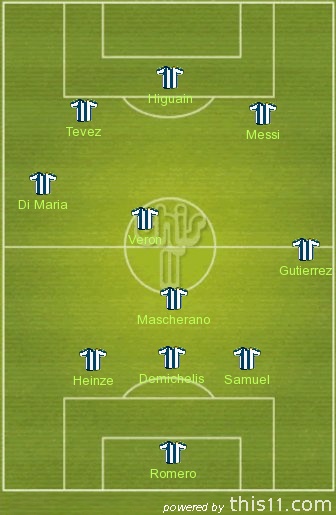 Well, they have the most terrifying strike-force in the tournament.  Diego Milito proved himself to be one of the best strikers in Europe this year, capping it off with a mesmerizing performance in the Champions League final and Sergio Aguero helped propel Atletico Madrid to a Europa Cup title.  There's no room for either of these men in Maradona's starting XI.  In fact, it wasn't until a couple of days ago that Maradona switched to a 3-4-3, squeezing Tevez into a front 3 and sacrificing a defender.  He joins Gonzalo Higuain, who finally established himself in a Real Madrid organization that initially wanted nothing to do with him, and Lionel Messi...simply the best player on the planet.  Messi's form for Barcelona has never fully translated to similar dominance on the international stage, but you cannot deny his ability to completely take over a match.  Argentina's attacking ability continues with Angel Di Maria, who will undoubtedly leave Benfica for an enormous amount of money after the World Cup is over.  Di Maria is an offensive-minded player, but Maradona's formation requires him to exert a lot of energy tracking back on the left side of the pitch.  However, this has proved to be no problem as of yet for the young winger.  Javier Mascherano has been handed the captain's armband and, given the attacking formation Maradona is using, is absolutely vital in maintaining the defensive integrity of the team.  He will play slightly in front of the back 3 in a holding role, and will leave the roaming to his midfield partner (Veron).

They sacrificed either Otamendi or Burdisso in order to accommodate Tevez in the XI.  This results in a 3 man defense with no true wing backs, putting a lot of pressure on the back 3 of Heinze/Demichelis/Samuel.  Heinze in particular is a shell of his former self, and is exposed by pace and capable of picking up silly yellow cards.  It would not surprise me to see this defense get caught out a few times during group play.

Group winners.  Too much talent not to.