In our first of a weekly series of Top Five Power Rankings, SB Nation Dallas picks the five more popular athletes in Dallas-Fort Worth.

While DFW is a full fledged sports city with representation from all four major sports, its history revolves primarily around one team -- the Cowboys. The biggest, most popular stars over the years have all been Cowboys, from Bob Lilly, Don Meredith, Roger Staubach, Tony Dorsett, Randy White and Drew Pearson to Emmitt Smith, Troy Aikman and Michael Irvin. Today, while the Cowboys are still king, stars from the Mavericks and Stars have emerged to balance the spotlight. Here are the five most popular current athletes in town:

No, he’s not the "face" of the Rangers. That would be Michael Young. But at just 21, Elvis has captured the adoration of Rangers fans more quickly than anyone since Pudge Rodriguez. His stellar defensive plays are becoming a matter of habit, and his quick growth offensively has made him arguably the best shortstop in the American League. He could make his first All-Star team this summer and appears likely to succeed Derek Jeter as the perennial AL All-Star shortstop. The all-time franchise leader in postgame pies-in-faces, Elvis is already the most popular Ranger, and he may soon vie for the top spot on this list.

The game-changer for a vastly improved Dallas defense, Ware approached the single season sack record in 2008, finishing with 20, and has cemented himself as one of the top defenders in the NFL, making three straight All-Pro teams and last October receiving one of the five largest contracts (six years, $78 million) in the league among defensive players. He is popular in DFW not only for his play but his reputation as one of the good guys in the league. He's a monster of a man, and he's become a monster on the local sports scene.

Modano is a tricky selection, because he may be considered an active athlete for just a few more weeks. Until his retirement, though, he is an easy choice. He is the only active star to win a championship in Dallas, as the Stars' Cup in 1999 is the most recent trophy in town. Modano is hockey in DFW and will be for generations. He is arguably the greatest American hockey player ever, and he is one of the more active Dallas athletes in the community. Modano even qualifies under the "married to a celeb" category. Those who follow hockey might argue that he belongs in the top spot. 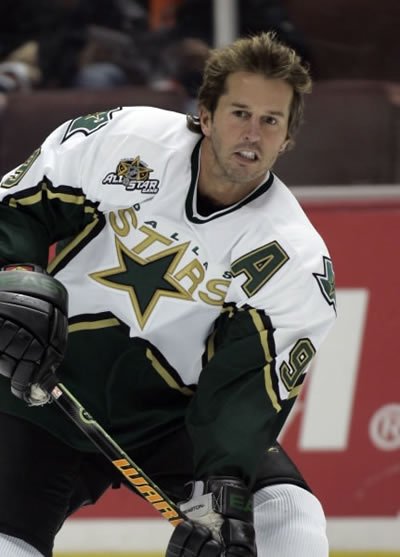 Nowitzki has been the greatest athlete in Dallas for the past decade and is now secure as by far the greatest Maverick in franchise history. His career averages of 23.0 PPG, 8.5 RPG and shooting percentages (47.3 FG, 38.0 3 PT, 87.6 FT) rank him among the greats of the NBA, and, at age 31, most of those numbers are only improving. His legacy may be tarnished by the Mavs' inability to finish off the Heat in the 2006 NBA Finals, and, as a free agent this summer, his future is just the slightest bit uncertain. But the seven foot forward is one of the most recognizable faces in town, and he's the second most popular athlete in town...

...behind this guy. Romo lives every day dogged by pressure, criticism and unrealistic expectations, and his casual persona rubs some the wrong way. His escapades, both private and on the golf course, are more famous outside of Dallas than his play on the field, but with a playoff victory under his belt and more efficient play, he came a long way in 2009 in silencing his critics and solidifying himself as a top NFL QB. The Cowboys immediately turned a corner in 2006 when Romo took the reins, and they have been a contender -- for the first time since the mid-90s -- in three of his four years as a starter. Romo will never be fully accepted until he joins Staubach and Aikman as a Super Bowl winning QB, but he is THE MAN in Dallas for the foreseeable future. 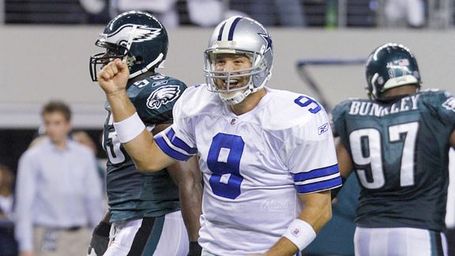