Expectations Against the Mariners*

Share All sharing options for: Expectations Against the Mariners*

To get you ready for the for the Mariners series, the first thing you should do is go see Chris's preview of the series at Lone Star Ball.

To supplement that, I've put together a little look at how the two teams compare so far this season to help give us an idea of what to expect in the series. Graphs and stuff after the jump!

*This was supposed to be ready for, y'know, the series. Unfortunately, I had a busy day, couldn't get this off the table by game-time, and then didn't even get to watch until the heart-breaking 9th inning. Suffice to say, 4-2 was pretty much about what you should expect with that line-up vs. Cliff Lee and the Mariners' line-up in Arlington in a Scott Feldman start. It wasn't a very winnable game before it even started; probably as close to a "give up game" you could find from a contending baseball team. The problem is how excruciating the ending was, and that all four runs came off of Feldman, who was kicked out after five.

I say we just look at that as a punt game and get ready for this three-game series against the Mariners.

First, a comparison of how the offenses have been hitting using the park-adjusted wOBA available at Stat Corner. This is based on the player's you're likely to see in each spot in the order through most of the series. 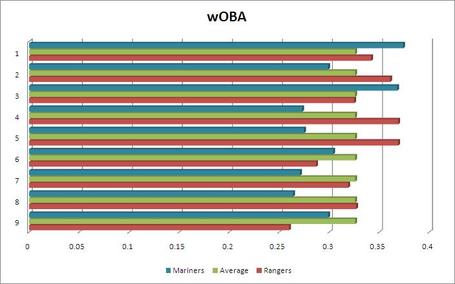 As you can see, neither offense is very consistently awesome, but the Rangers are pretty awesome at the heart, while the Mariners are good at the top. Using the wOBA derivative bRAA, we can get each teams runs per game, add that to the average AL runs per game (4.54) and adjust for the ballpark and get our offensive expectations. Against an average pitcher and defense in this series*, the Rangers performance this season points to about 4.86 runs a game, or close to 15 runs in the remaining three games if you want a whole number to set your expectations on. For the Mariners, those numbers are about 4.15/13.

Unfortunately, the Rangers will not be facing average pitching and defense. Fortunately, neither are the Mariners. To begin with, here's a shot of the pitching this season in each game via xFIP: 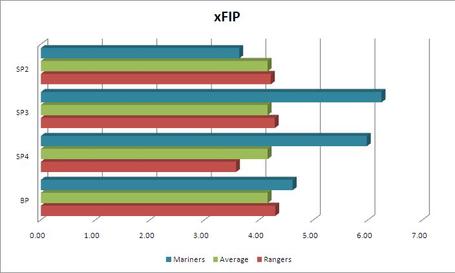 Remember, the lower the better here. As you can see, King Felix. Meanwhile, the Rangers have gotten much better performances out of their games three and four starters and the bullpen. There's some small sample size at play here (and in the defense), but this is heartening, at least.

Then there's the fielding. To start with, a quick chart displaying how well the fielders likely to be seen this series have played: 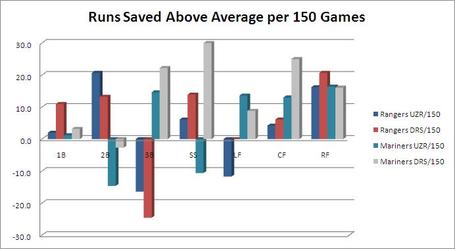 Now there's some serious small sample size at play here. At this point, these guys are more likely to play like they have over the past couple seasons than they are to keep these rates. This is something I'll probably take in to account in the future, but this is to show you how things have gone this year.

So, if we combine the pitchers expected runs allowed per game, fill in the rest of their innings after their per-start average with the bullpen (for Tommy Hunter I'm using last year), add the runs above average each offense can be expected to put up, subtract the defense and adjust for the park (whew), we get this projected expected runs scored for the rest of the series. . .

Now we're talking! Rangers definitely looking like the better team once you take the Cliff Lee game out of it. Using the pythagenpat estimate (and including a slight home field advantage) we can expect the Rangers of the next three days to have a .725 record against the Mariners of the next three days, or at least two wins. This assumes a lot of things, such as the performance of the first third of the season to continue, and anything can happen in three games (we just saw that against the Rays), but this should help you a little bit to understand what the chances are going forward in the series and where those chances come from.