Mavericks across the pond

Share All sharing options for: Mavericks across the pond

The Mavericks were the oldest team in the league last year, and will probably be the oldest again next year. Oh, how I envy the Thunder. They're going to be good for a long time. But the Mavs were there once upon a time. Remember the Dirk bowl cut? Good times. You could argue that old experienced teams win championships. The Celtics are back in the NBA finals and Garnett's knees are at least 87 years old. However, youth is needed. The Celtics were looking like corpses before Rondo injected some life into them, and the Mavericks sputtered until Beaubois was inserted in the 2nd half of game 6. Too little, too late. Lesson learned.

Rodrique Beaubois was a revelation this past season. If he comes close to realizing his potential, the Mavericks will have an integral piece to build on in the Post-Dirk era. But will anybody be joining him? Let's take a look at the Mavericks across the pond.

Nick Calathes. Calathes is a 6'6 point guard. He can also play shooting guard and a little small forward on occasion. Being tall is fun. He's 21 and played for Greek powerhouse Panathinaikos this past season. He held his own, earning a call up to the pro team in his first year.

Not bad at all. The Mavs will have to pay  a $500,000 buyout if they want him to come over next year,  but I suspect they'll leave him in Greece one more season.

Ahmad Nivins Power Forward from Saint Josephs. He spent this past season in Spain.

He will probably get a chance to prove himself in summer league, but it's not looking good.

Shane Foster. Shooting Guard from Vanderbilt. Well, he's still waiting to play in the NBA. Shane was drafted in the 2008 draft and after a stint with the Mavs summer league team he was off to Europe. He spent this past season in Turkey with former Longhorn great, Brad Buckman. It wasn't pretty.

39% from 3 isn't bad and that will probably get him another look this summer to see if he can stick, but his chances are slim. And the Mavs quest to find a player/anthem singer to replace Stack will continue.

So yeah, for now it's on Roddy. With a little Calathes sprinkled in down the road.  There will be a lot riding on his shoulders, but he should be able to handle it. 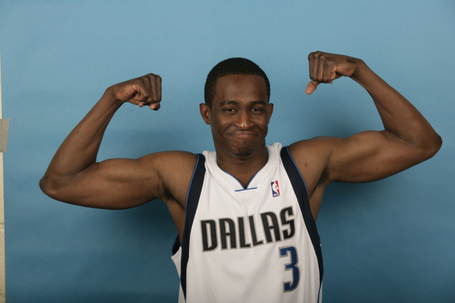