Here's one way to have help someone have the second worst outing (by FIP*) of his season: 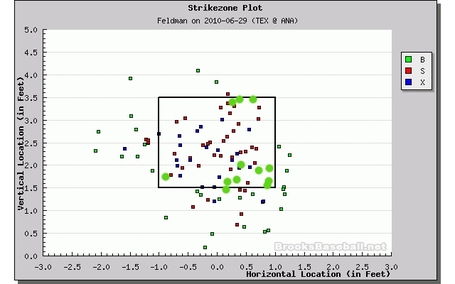 For ease of use, I've highlighted all the pitches that PITCHf/x thinks crossed the strike zone, but were called balls. There are twelve of them. (Click for a larger view.)

To be fair, some are pretty low and some are pretty high, so they could have been subject to batting stance, I guess. But watching last night, it sure did seem like Feldman was getting squeezed. And this doesn't really change my mind on that much.

Hat tip to Ranger100, who reminded me to look at this and provided a similar look at Darren Oliver.

In the interest of full disclosure, here's Piniero:

*Feldman's FIP for the start was 6.66. His worst start was June 2 in Chicago with a 6.83. His best was June 24's 1.37 in Pittsburgh, and he also managed to stay under two in Houston. His best start including strength of opponent would probably be a 2.70 on the road against a pretty awesome Brewers offense.