Welcome to the most important three games of the Rangers' season so far. By, like, a lot. Texas is sitting pretty with an MLB-best 85% shot at the playoffs. By Thursday night, that number has a good chance to be very different, one way or the other, and we'll have a better idea of how the Rangers will be doing against their chief competition down the stretch.

Texas will be leaving LA in first place, so that's good news. If things go horribly, though, the lead will be a scant 1.5. If they go fantastically, it will be a dominating 7.5. What's most likely? I don't know, because no one can ever predict what will happen with the Angels. But, I'll at least give it the old college try.

The Angels, as usual, are winning more games than any expected record metric would suggest. Whether it's an unlikely run of good luck that's gone on for years or something undetectable that lets them pick and choose when they get their hits, I don't know. Their second-order record (pythagorean record using equivalent runs) is eight wins behind their actual record, 10.5 games behind the Rangers. That said, their third-order record (same thing, adjusted for schedule) is only off by about six wins, and third-order records would "only" put them about 6.5 behind the Rangers; so the talent disparity hasn't been much, if any, larger than the actual record suggests.

We will, of course, being seeing both Weaver and Piniero. Yay. Weaver has been, by far, the most valuable Angel this season. He's Cliff Lee's competition for the Cy Young right now. Napoli's value should be plummeting going forward because he's now gone from the most valuable position on the field to the least, and he's playing horribly there. 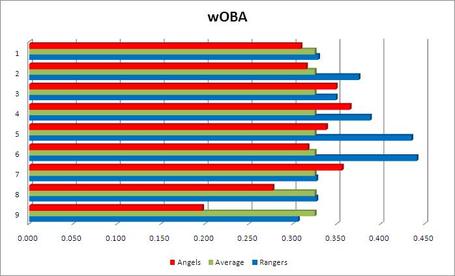 Remember this is not adjusted for ballpark, though the difference between the two parks is not actually too staggering. The Rangers have had the better hitter at almost every position this season, and that's backed up by the Rangers' nearly 36 run lead in (adjusted) weighted runs above average.

By the way, it wasn't too long ago that the Rangers, like the Angels, were a mediocre offense at best on the season. They are now behind only the Yakees, Red Sox and Brewers.

So offense is a staggering win for the Rangers so far in 2010. Close your eyes for the next part. 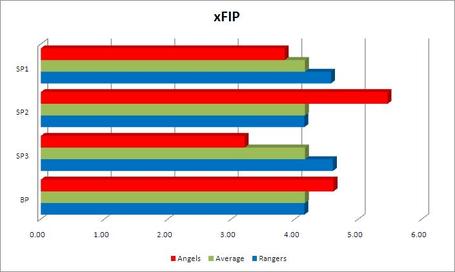 The Rangers will apparently be starting Omar Beltre Wednesday, and I don't have a clue what to expect out of him. He doesn't even have any projections anywhere I know of, nor could I manage to find somewhere to create an MLE out of his numbers in the minors. I just plugged in the bullpen's xFIP to fill out the graph.

It is the best game for him to start, though, as Kazmir has struggled this season. And, who knows, maybe the lack of scouting on him will leave the Angels baffled.

Other than that, the Angels have a decisive advantage in the starting pitching this series. C.J. Wilson's typically-controllable performance has declined dramatically his last few starts, but inferior opponents and good luck have kept the runs down. Both he and Feldman are starting to look merely like back-of-the-rotation fillers (not that such a pitcher doesn't have value), while Piniero has been very good (and amazing value for the Angels), and Weaver has been beyond superlatives.

Fortunately, the Rangers bullpen is very good and the Angels bullpen has struggled. In particular, the back of the Angels bullpen has been pretty bad. Of the four pitchers the Angels give the most leverage to out of the pen, only one, Kevin Jepsen, has been better than replacement level. Closer Brian Fuentes has been pitching with a staggering 2.13 average leverage index (one being average), and has been almost three runs below replacement in that time. If the Rangers' starters can merely go six innings and keep it close, and if the Rangers' offense can keep the Angels' starters from going the distance, that's were Texas will have a dramatic advantage. 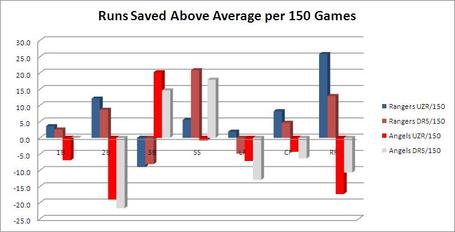 As usual, this is the players likely to get the most time in the series. And, as usual, there's a lot of small sample size in play here.

This may come as some surprise, but fielding just has not been a strength for LAA this year. Their pitchers manage to keep the ball out of play often enough to sort of minimize the damage the fielders can do, but it's still not pretty. As the graph suggests, the Rangers have likely performed better at every position outside of third base.

The pitching matchups are ugly, and the Angels get to play at home, but the Rangers have sizable advantages in the fielding and scoring. What does that mean in terms of where our expectations should be?

Beltre, again, made this very difficult. I decided to play it a little conservative and used roughly a replacement-level starter (about five RA and about five IP; think Dave Bush). I do think there's a really good chance he'll be much better than that, due to the lack of scouting on him, not to mention his talent.

The expected runs scored, with these pitchers, these lineups, these defense and these pitching matchups, is actually in favor of Texas. Though it's close, the Rangers should be expected to score at least 16 runs in the series. The Angels are more iffy thanks to Beltre, but holding LAA to fewer than 14 runs over the series should be considered a success. You can do this math yourself: the Rangers have a better-than-good chance to outscore the Angels in the series, and thus have a good chance to win the series.

Thanks to Jered Weaver, Game 3 is probably the only one where the Angels have an advantage in a neutral setting, though it's very close (about 51-49 out of 100). Game 1 is similarly close for the Rangers, while a replacement-level debut for Beltre still gives the Rangers a meaningful (~62/100) advantage in Game 2.

Unfortunately, it's not a neutral setting. Here's a chart of the distribution of Rangers wins as projected by the excellent tool Steve Sommer made available to me. (Regressed, park-adjusted wOBA was used for the offense, and a split of DRS and UZR was used for the defense.) 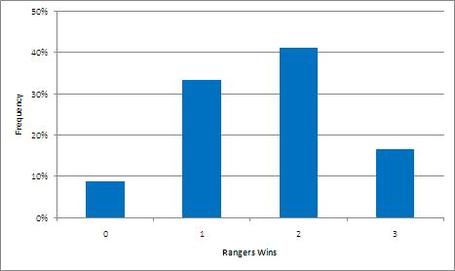 Homefield advantage ups the wins by the Angels a few, but, even then, this gives the Rangers the series win 58% of the time. Not an overwhelming advantage at all, and I think we all know the Angels aren't too predictable, but still encouraging. The Rangers are more likely than not exiting Anaheim on Friday having increased their division lead. And disaster should strike fewer than 10 times out of 100. Even merely getting a single win would only drop the AL West lead a game, and this suggests that at least happens 1/3rd of the time. (Bumping Beltre up to just the bare minimum of a Quality Start doesn't make much of a difference, by the way.) And think about it this way: the most likely outcome of this series probably has the Rangers leaving with a 5.5 game lead in the American League West to start July.

Obviously, none of this will make anyone less nervous. And that tiny bar on the far left is tiny, but still there; the Angels have at the very least a legitimate shot at winning, if not sweeping the series. This is where Chris Berman says "And that's why they play the game." But this should go to show that even beating up on weak competition, the Rangers are very unlikely to completely fall on their faces in LAA, and that's what it would take for us to really be down when this is over. Even just getting a single win, on the road, with these pitching matchups would be nothing to complain about.