What We Learned Against Houston (Again)

Share All sharing options for: What We Learned Against Houston (Again)

THE BOOT IS OURS! Silver Boot! Silver Boot! And by ours, I mean the Texas Rangers'. Yes, yet another Interleague season has passed us by with the Texas Rangers securing the Silver Boot. I've never been more relieved. The thought of those Drayton McLane troglodytes getting their sweaty Southern Texan hands on our Silver Boot just sent shivers up my spine. If nothing else, at least Tom Hicks will have something to hock if the sale doesn't go through.

And yet, this lady, with the Rangers nearing the best record in baseball and their best record at this point in the season, is clearly not impressed nor satisfied. 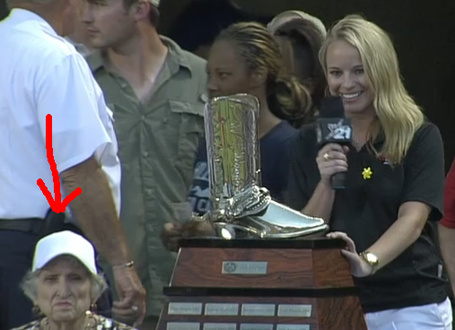 The price of heightened expectations...

So what did we learn against the Astros?