Thoughts On The College World Series And C.J. Wilson

Share All sharing options for: Thoughts On The College World Series And C.J. Wilson

There was more than just the United States losing to Ghana in Extra Time today going on in the world of sports. Texas Christian University had their Cinderella run at the College World Series ended at the hands of UCLA today, losing 10-3. The Rangers, having had their 11 game winning streak snapped Friday night, came back today to avenge that loss, beating the Astros 7-2 and in the process, winning the season series and claiming the good old Silver Boot. A win is always a win and a loss is always a loss, but things aren't necessarily how they appear for both TCU and the Texas Rangers today.

I'm sure every single player on the TCU roster today is devastated and heartbroken after being eliminated from the College World Series by UCLA today. The Horned Frogs will be losing at the minimum Matt Curry, Paul Gerrish, Bryan Holaday, Tyler Lockwood, Eric Marshall from their roster this year since they're all seniors. Holaday will most notably be missed as he's largely considered the heart and soul of the Horned Frogs team and it's never easy to replace a guy like that - especially when he's a catcher and handling the pitching staff.

Everything is not lost, however, for TCU. This was after all their first trip to the College World Series. This was a team that wasn't even supposed to make it to Omaha this year, but they managed to overcome the odds and defeat a favored Texas Longhorn team in the Super Regional to even advance to the College World Series. Even further, TCU did manage to win three games while being there, including an amazing comeback against Florida State in which TCU scored eight times in the eighth inning, capped by a dramatic grand slam from senior Matt Curry. Additionally, underclassmen such as prized lefthander Matt Purke, who went 16-0 this year for TCU, gained a lot of high leverage experience in the process. Couple this 3-2 run in the College World Series with the Fiesta Bowl BCS Bid (despite the loss) put TCU on the national map for both baseball and football. That in itself is a victory, as it will help immensely with recruiting trips for both programs.

As for the Rangers today, yes, they won, and there's plenty of positives to take from the game, especially the fact that they won. Texas pounded out 15 hits, Josh Hamilton extended his hitting streak to 20 games, Nelson Cruz had three hits and Ian Kinsler showed some of his power that's been absent this year after hitting his second home run of the season. C.J. Wilson picked up his sixth win of the year, which is a new career high for him. That it's a career high should be no surprise as he's been converted back to being a starting pitcher for the first time since 2005. He's also nearing 100 innings pitched on the year - his previous career high was last year when he pitched 73.2 innings. Further, there's only been two instances the entire season where Wilson did not exceed 100 pitches, his first start of the year against Toronto and a shellacking against Anaheim where he didn't escape the fifth inning.

In Wilson's past four starts, he's faced the Astros twice to go along with the Marlins and Mariners. Not that it's any fault of his, but the offenses he's faced as of late aren't exactly top notch. In those starts, he's walked three batters twice, (6/9 against Seattle in in seven IP and 6/20 against Houston in seven IP) six against the Marlins in six innings on the 15th of June and another four today in seven innings. That's 5.3 BB/9 for that four start stretch. That walk rate going forward against more difficult competition, and a fatiguing arm, is not going to be conducive to consistent results. Even further, he's simply not generating many swings and misses, especially out of the strike zone to go along with his 5.6 K/9.

Wilson generated seven swings and misses against the Mariners: 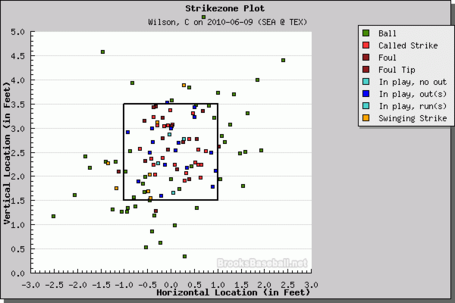 Five against the Marlins: 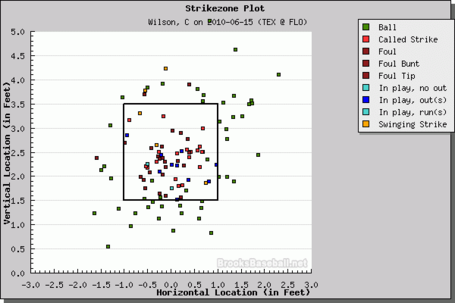 Six against the Astros the first time: 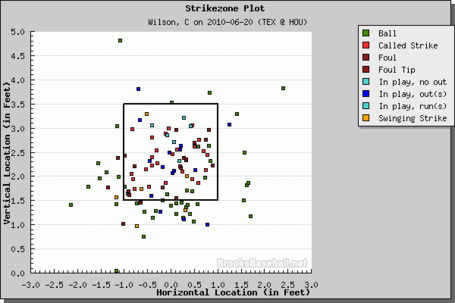 Eight against the Astros today: 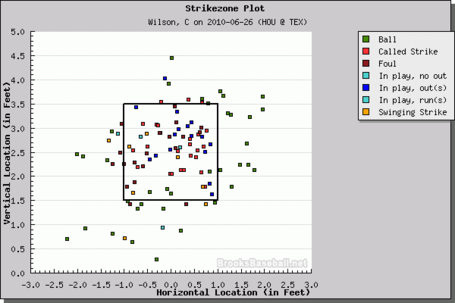 While the eight swings and misses today shows an upward trend, bear in mind that the Astros are sporting essentially an AAAA lineup. I don't expect Wilson to generate a ton of swings and misses or strikeouts, but he's pitching out of the zone a lot and batters just aren't biting. After today's start, Wilson also leads the American League in walks. For a reliever turned starter for the first time in half a decade, it is a bit worrisome. The Rangers are going to have to take it easy on Wilson going forward to see if he'll harness his command.

I'm hardly one to advocate a one size fits all pitch count on pitchers, but the fact that Wilson has thrown under 100 pitches only twice this year is a bit concerning. Wilson's effectiveness shouldn't be gauged by his ERA or if the Rangers win the game; it should be gauged by the quality of his pitches and his efficiency. It's not crazy to conclude or think that Wilson will continue to fatigue and become more ineffective as the summer wears on. The Rangers should try to spot him here and there and limit his pitches and save his arm for the end of the summer and stretch run.

Texas is five games up on Anaheim, but it would be nice for the Rangers to be at full strength and not have one of their starters fading down the stretch when they need them the most.