What We Learned Against Pittsburgh

Share All sharing options for: What We Learned Against Pittsburgh

I don't care about the competition anymore. Yes, the Rangers are going to lose a game again, and yes they're going to play better teams that are going to take some series from them, but the Rangers are finally winning the games they should. And even though this streak is against teams that are bad, nothing is a given. Even really bad teams beat really good teams about 30-35% of the time. I'm just impressed. I'm impressed with the Texas Rangers as a winning entity. That has happened so few times in my life. Winning 11 straight games in Major League Baseball is damn impressive. 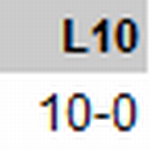 So what did we learn against the Pirates?