Getting Your Ace: Risk/Reward

What would it cost for the Rangers to go out and get rotation help and, more importantly, is it worth it?

Share All sharing options for: Getting Your Ace: Risk/Reward

There's been talk constantly -- among the media and Rangers fans -- about "getting an ace." Nabbing that awesome arm to aid Texas in the stretch run and give them the advantage in games one and five of a playoff series, and what prospects should be given up to get one.

The news that the Rangers sale will probably not be done by the trade deadline may impede things a bit, though Jon Daniels says otherwise. Regardless, the Rangers appear by all angles to be looking for a pitcher to help them out going forward, and the two most common names thrown around are Cliff Lee and Roy Oswalt.

As a primer, if you haven't already, you should read the excellent piece by Dave Cameron of FanGraphs assessing Lee's trade value, and Joey Matschulat's similar article on Oswalt. In short, Cameron evaluates Lee, from this point forward, as being worth a high quality prospect and some filler; in our case, that probably means parting with Martin Perez. Due to his contract, Oswalt is worth a lot less, with Matschulat suggesting someone like Danny Gutierrez. There are certainly perhaps other helpful pitchers on the market, and by following the approach these two pieces take, you can fill in their value in a vacuum yourself.

It seems doubtful to me that the Rangers can afford the contracts, however, particularly Oswalt's. The latest discussion at Lone Star Ball begins with Cameron telling Jamey Newberg if the Mariners pick up all of Lee's salary, the cost should be Perez, Chris Davis and a lesser guy. If the Astros pick up most or all of Oswalt's contract, thanks to an extra year of control, I imagine they'd want something similar. Getting one of the fantastic pitching additions everyone is clamoring for is probably going to take parting with the best left-handed pitching prospect in baseball, it seems.

First, let's be very clear: the Rangers do not "need" an ace. They do not "need" to trade for a top of the rotation pitcher. Baseball Prospectus currently has the Rangers' playoff odds at 87.7 percent. I'm not quite that confident because I cannot convince myself the Angels will ever lose games at the rate their performance says they should because they're the Angels, but this season is far more likely to end with the Rangers in the playoffs than not. An upgrade to the rotation makes that a little more comfortable, but it's not likely going to put them over the regular-season hump because they're already likely over it.

Second, the boost from adding a pitcher might well be less than you'd guess. By Matschulat's math, Oswalt is most likely worth something in the range of a 0.11 wins per start over a replacement-level pitcher the rest of the way. Even the much-maligned Rich Harden has been replacement-level this year, and I feel comfortable saying whoever is the Rangers' fifth-worst starter the rest of the way (without a trade) is at least that good. So if Oswalt gets another fifteen starts after the trade, you're talking about the Rangers winning only a game or two at most the rest of the way with him in the rotation (and that's assuming he doesn't get rocked upon moving to the AL). Lee's been about twice as good as Oswalt, so you're looking at something in the range of three or four more wins with Lee than without him. That's certainly a help, but is improving a couple of wins what it will take for the Rangers to win the division?

Now if you don't, that doesn't necessarily make the trade a bad idea, and it also means the Rangers might do well to hold off as long as possible to lower the asking price. You obviously run the risk of losing the bidding war to another team, but, using Lee as an example, waiting until the trade deadline lowers the likely contribution by around a marginal win (2-3 above the back of the Rangers' rotation). Using Cameron's method, that takes the surplus value received from Lee down around $5 million. Using Victor Wang's prospect valuation model just waiting until the deadline drops the likely Lee expected return down to a top 76-100 prospect, pitcher or hitter, and probably some other filler. Now we're talking about maybe Tanner Scheppers being too much, and perhaps a combination of pitchers John Sickels would give a B grade. Maybe even Jurickson Profar will be highly regarded enough by that point to be the headliner of such a deal. We're still talking about prospects that would hurt to lose, but by waiting until the deadline, at least we might not be talking about Martin Perez.

If you buy that the Rangers are extremely likely to make the playoffs, then the rallying cry to get an ace probably becomes giving the team a shot in the playoffs by putting a stud out there twice in a series, rather than relying on Colby Lewis followed by whoever is still pitching well. Once again, not a misguided idea, but it should still be looked at in terms of likely reward. 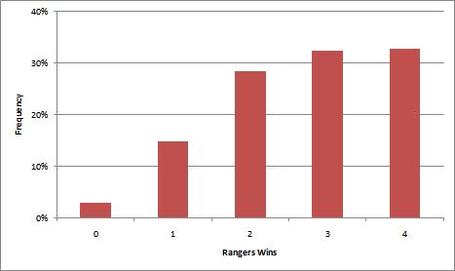 This chart uses Steve Sommer's excellent series projection tool* to simulate the potential of the Rangers winning a seven game series against the Yankees, starting tomorrow, with completely healthy rosters. As you can see, this would suggest the Rangers win that series just under 33 percent of the time. With things as they currently are, the Rangers would absolutely be the underdogs in a post-season series against probably the best team in baseball, but they'd still have about a one-in-three shot. Now then, how does Lee help?

*For those interested in the nitty gritty, I used regressed wOBA for the offense and Derek Holland as the 4th starter. Also, full disclosure, I'm not 100% sure I manipulated it to do a seven game series correctly, but the results should still be about the same if I didn't. 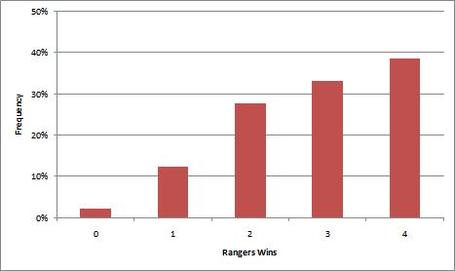 Everything is the same here, except the Rangers now have Lee pitching games one and five at his same ridiculous pace this season. Quite obviously, it's a boost, but it's only a little less than 7 percent, up to about a 39 percent chance in the series. So it's gone from one-in-three to two-in-five, though still not even 50/50, let alone favored.

So that's what you have. Getting Lee gives the Rangers something in the neighborhood of three more wins this year (more or less, depending on when you get him), and around a 7 percent better chance of winning a playoff series, and then he's gone after the season is over. Oswalt gives you quite a bit less production, an extra year of control and a much more expensive contract.

Added to this is the fact that the Rangers window of opportunity is just now opening. They're not a team with a group of impending free agents or a aging roster, and there's still a stacked farm system to build on for the future. Everyone would love to have a better rotation, and we'd all love to watch Lee pitch every fifth day. If you want to get him now and avoid the Mariners going to another team well before the deadline, or if the team can't afford the contract, that probably means giving up an elite prospect like Perez. This is not to say that demand is too high, it isn't, but you have to decide if the marginal gains here are worth selling out that little piece of the future. I personally don't think losing Perez is worth a handful of wins when the playoffs are already likely or a slight gain in the playoffs when winning the World Series would still be unlikely, but I can understand wanting to go for it right now when a good shot is at least guaranteed. And, certainly, losing Perez doesn't close the window on the future, it just makes it a little less wide-open.

Of course, none of these words or any others spilt by us after will ever reach the Rangers front office, nor would they care if they did. They'll make their decision, with some potential risk and some possibly awesome rewards on either side. We just have to hope the move they make (or don't make) ends up being for the best.