Expectations Against the Pirates

Share All sharing options for: Expectations Against the Pirates

Remember how the Astros series looked like as close to a certain sweep as a series could? Well, the Pirates might be worse. And this one is at home.

The Pirates are bad. Let's look at how bad and how they're going to win, if they do. And remember, for more depth on the series, check out Chris's preview at Lone Star Ball.

So bad. I didn't feel like detailing any of the No. 5 guys because they're just not worth it. Only two guys on this team are on pace to have even above-average seasons.

McCutchen is a legit star, that's all I've got. Jones has played a lot of outfield this year, but mostly he's played first lately. Hell, he might DH this series, I don't know.

There's a serious issue when a middle reliever has been one of your four most valuable players. 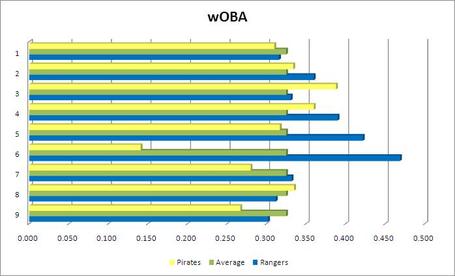 Best part of this graph: the return of Nelson Cruz's psychotically huge bar. By the way, is it weird to anyone else seeing offense like that at the five and six spot?

As you can see, the Rangers have, by far, the better offense. This isn't quite the difference between the Rangers and the Astros, but the Pirates this season (with park adjustment) have been nearly 70 weighted runs worse than the Rangers (-54.7 to 13.7 vs. average). The McCutchen and Jones tandem is the biggest concern.

One interesting note is super prospect Pedro Alvarez being early in his rookie season. Worked out pretty well against Mike Stanton. I don't actually know who's going to play DH for the Pirates, but I assume it will be LaRoche after losing his job to Alvarez, but getting some pinch hit duty. 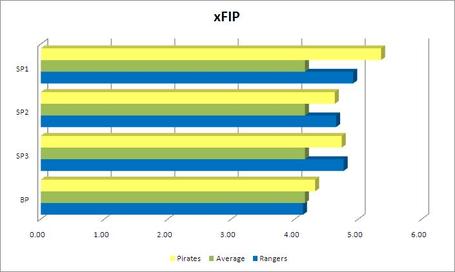 Due to being an okay pitcher and a lefty, Maholm gives the Pirates their best chance of the series. This here has Nippert matching up very well with him, but that's because Nips has been a reliever. Of course, Maholm gets to pitch against the NL. Otherwise, pitching matchups seem to favor the Rangers, especially when league quality is concerned.

The Pirates actually have a solid bullpen, and Evan Meeks has been fantastic. The Rangers just happen to have one of the best bullpens in baseball. 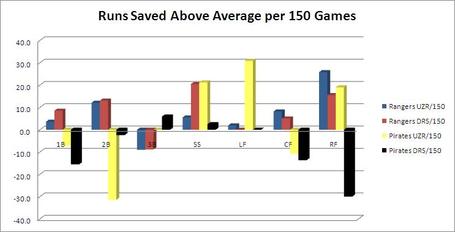 One note on the fielding: Pedro Alvarez's UZR/150 has actually been -160.8. I made it average so that the graph would be readable.

As usual, there's a lot of small sample size stuff here, so take things with a grain of salt. The Rangers are the better fielding team, with about a 40 run lead in UZR and 48 run lead in DRS.

As with the past series, accurate projections are iffy due to the league difference, so I won't bother.

Here are some non-league adjusted things to consider. This Rangers lineup, against an average pitcher and an average defense in a neutral park, hits like roughly a 5.5 runs per game offense. The Pirates, by the same methodology, have been hitting like just under 4 a game. As far as run prevention, against the average offense, the pitchers and defense for the Rangers this year have played in a way that would suggest allowing around 4.4 runs a game, vs. 4.9 for the Pirates.

Adjusting for the park and combining the offense and the defense, we as fans should probably expect the Rangers to score at least 18 runs this series, and that's treating the NL as an equal league. And any more than 12 runs from the Pirates should probably be seen as a little disappointing.

Okay, so we have our expected runs scored and allowed. If we plug those numbers in to pythagenpat, then, given an infinite number of games with these exact match-ups, the Rangers could be expected to have a staggering .763 record against the Pirates, more like .803 with homefield advantage. That's just under 2.5 wins over three games. In other words, when you consider the league difference, this is probably actually be a series where the most likely result is a Rangers sweep. That is pretty awesome and pretty rare.

I don't need to tell you this is a very bad team visiting a good team. The problem is, the Rangers should probably win at least two games, and should probably be happy with anything less than a sweep. That's sort of setting us up for a let down, as there won't be much to hang our hats on this series if the winning streak doesn't get to 11.