Expectations in the Astros Series

Share All sharing options for: Expectations in the Astros Series

Note: The following preview has a dumb mistake. In rushing to get it done, the line-ups include a DH despite the game being in an NL park. Please ignore the names Guerrero and Michaels.

Unfortunately I have a busy Friday lined up, so not much of a post going on below here. But, for those who like the graphs, they're still here for you.

In short, the Astros are very bad. Maybe the worst the worst team in baseball, with only the Pirates keeping it from being obvious. This is the rare series where you might be okay expecting the Rangers to sweep.

For reference, Rodriguez's total would rank 13th on the Rangers. And that's assuming he's not beefing up a little against the National League. 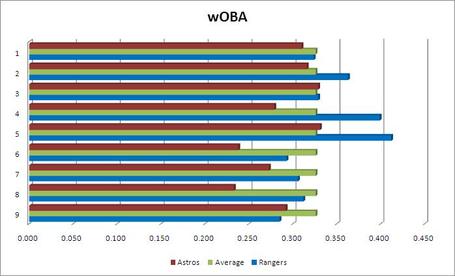 Very, very bad offense. Berkman an Pence are the only Astros better than average this year, just barely; in fact, they're the only ones even close. And, again, NL. 9th in the only spot where the Astros are better than the Rangers, and Borbon has at least been hot. The Astros' park-adjusted wRAA has been almost 90 runs below average this season. Ninety! The Rangers offense alone has been worth around 10 wins better than Houston. 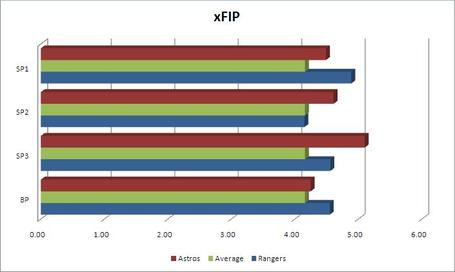 Game one is the Astros best chance in the series. Don't let Wandy's ERA fool you, he hasn't been terrible. Just mediocre against a league where pitchers bat. He's also a lefty, and we know how that tends to work out for us. Probably should come as no shock if the Rangers lose the opener, as Rodriguez is probably better than Feldman, the Rangers can't handle southpaws, and the bullpen (in the NL) has been slightly better in Houston. Still, their offense is so bad I'm still picking the Rangers in game 1.

DRS thinks the Astros are pretty close to average, just two runs below. UZR's -16.6 thinks that's generous. Either way, it's worse than the Rangers. The Astros only real hope, outside of the typical luck and "anything can and does happen" stuff, is Wandy Rodriguez tapping in to what he's done in the past and shutting down the Rangers. Help from the offense and the defense is unlikely.

Baseball Prospect's 2nd order record thinks the Astros have been extremely lucky, to the tune of almost six wins. 3rd order record thinks their true talent has been around 22 wins to the Rangers' 35. And that's in an easier league. You'll hear a lot about how the Rangers need to pad their schedule right now, and that's with good reason: losing a lot of games against the worst teams in baseball will hurt a bunch when the schedule gets rough again. The Rangers have to beat up on the Astros. Fortunately, they probably will.

This looks like a beatdown. Just by looking at the teams' offenses this season, the defenses and the pitching matchups, the Rangers can probably be expected to score around 16 runs in the series while the Astros can probably only expect around 12. That's a rudimentary estimate that's just based on team wRAA to this point in the year, and doesn't account for how the Rangers are hitting lately, or the loss of Nelson Cruz, or the Astros getting a DH, or the league differences, or pitcher handedness, but I'm guessing it's at least in the ballpark, and probably a conservative estimate for the Rangers. This matchup at home, the Rangers can probably be expected to win at least 70% of the time, if you treat the leagues as equal.

No one should cry over just winning two, there's nothing wrong with that. But anything less would be a huge blow. Anything can happen, but hopefully nothing unfortunate and unexpected will. The Rangers should and need to win this series.