Expectations In The Florida Series

Share All sharing options for: Expectations In The Florida Series

I'm holding off on more series projections until the Rangers get back to the AL, but here's still a look at the Marlins and how they stack up against the Rangers.

And remember to look at Chris's Lone Star Ball preview if you haven't yet.

Top Five Marlins in 2010 (per FanGraphs)

Yes, the Rangers have to face Johnson, who has been one of the very best pitchers in baseball to date. And then they get Sanchez, who has merely been worthy of an All-Star argument.

First off, comparing the batting orders by the players likely to be see the most PAs at each position this series and how they've done so far. 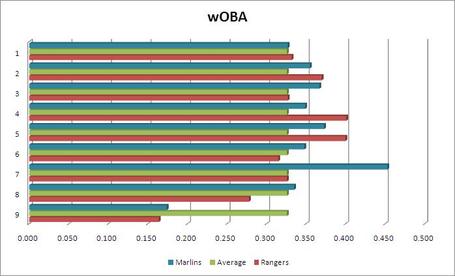 That Stanton average is based on a handful of MLB games, of course.

The Rangers' offense has been a little bit better than the Marlins' so far this year, despite facing a higher quality of pitching (though without a DH). The Rangers have a park-adjusted team wRAA of 7.8 vs. the Marlins' 4.2. Advantage Rangers, but by the slimmest of margins. The tough thing about Florida's line-up will be the lack of relief. As you can see, they throw a solid hitter at you almost every spot in the order; few are killing the ball this year, but also few have been hopeless.

The offense comes in the form of not just hitting the ball over the fence (60 home runs, fourth in the NL), but also with plenty of base hits (.263 BA, fourth). Fortunately, they possess a mediocre .329 OBP, thanks to being the second worst NL team at working walks (8.2 percent). Oh, and expect the Rangers starters to rack up plenty of Ks, as they're the second worst there, too (23.1 percent). Quite the free-swinging line-up, but swinging away without ever working walks is a bad recipe. Or a good one, as far as we're concerned with the Marlins. 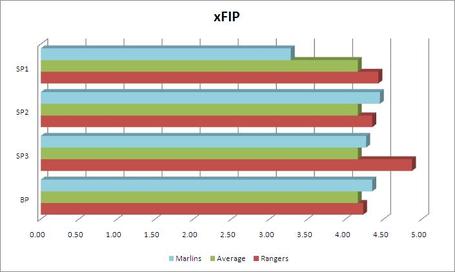 This is where the advantage is on the Marlins. Just like the Brewers series. the Rangers are going against an inferior opponent, but just happen to be getting the poor luck of bad pitching match-ups. The Marlins probably have the better starting pitcher in all three games. Fortunately, none of those three are lefties. Yay!

Again, this is the probables to get the most innings at each position this series. 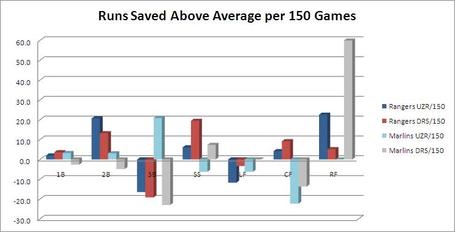 Back to Advantage Rangers. Texas has the better fielder this season at every position except 3B (and Young has amazingly been better than Cantu in DRS) and left field. Just ignore right field since neither has spent many games there this year. The Marlins aren't bad defensively, they're just mediocre, while the Rangers are legitimately good. This, other than league quality, is where you find the most separation between the teams.

It should also be pointed out the Marlins third order record is less than a win behind the Rangers. Florida is not a bad team, and this isn't a walk. Especially on the road against good pitchers. But the leagues are not equally talented and the Rangers do prefer right handers on the mound. This is much more dangerous than the Brewers series, and while the Rangers should be favored, just managing to get two of the next three should be considered even more successful than it was over the weekend.