On Rich Harden And The Rotation

With Rich Harden headed to the DL, we look at what's gone wrong with the promising signing, as well as the state of the Rangers' rotation.

Share All sharing options for: On Rich Harden And The Rotation

Friday brought with it another poor Rich Harden start and Saturday brought with it the news that Harden was going to the disabled list. Whether Harden's actually hurt and whether this is the end of his time in the Texas rotation remains to be seen, but one thing is pretty certain: The signing just isn't working out.

Bringing Harden in was met with much fanfare. A pitcher with a real, quality track record had finally signed with Texas! The Rangers might actually have their ace! Really, expectations probably should have been tempered after Harden posted a career-high 4.35 FIP -- good for 1.8 wins above replacement, -- in 2009, which came in the National League. Still, I don't think anyone should have expected the decline we've seen so far in 2010: 5.71 xFIP, 6.31 FIP, 6.09 tRA and a below-replacement level performance.

It's always important to distinguish between process and results. The process of attaining Harden was solid. Kevin Millwood wasn't much better than Harden in 2009, had a lower ceiling based on his track record and was more expensive than Harden (and, it should be pointed out, hasn't been much better than Harden this year, either). Harden wasn't even being paid market value for an average player and possessed the possibility to be much better than that. Unfortunately, doing things right and smart doesn't always result in something good. Bad things happen, and even sound process can lead to horrible results.

And that's where we are with Rich Harden. He's managed this season to be even worse than what you'd usually call worthy of being on a Major League roster. The skills shown to be most repeatable and tied to pitching success have all gotten worse. 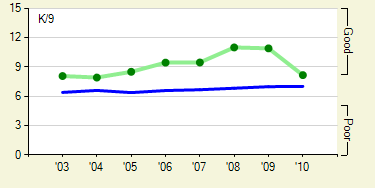 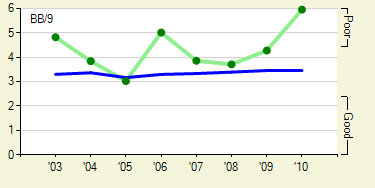 His K/9 rate has dropped from his career average by more than a full strikeout to 8.17, way behind the 11.01 and 10.91 he posted the last two seasons. His walk rate has jumped by almost two walks per nine to 5.95. And his 53.8% fly ball rate is 12% worse than his career in a park where that's going to kill you; his HR/FB rate is right in line with his career, but the park and the exploding fly-ball rate have resulted in allowing a full home run more per nine than he has over his career. He hasn't even been unlucky with a .295 BABIP.

And there are even some explanations for the bad, beginning with a loss in fastball velocity. 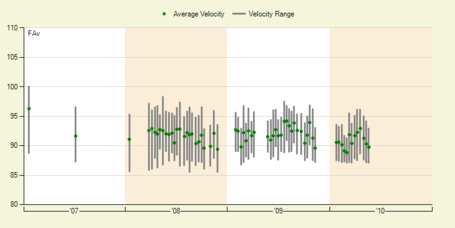 Harden's fastball has dropped in velocity steadily as far back as we have them charted, from a 94.1 mph average in 2007 to 92.2 last year to 90.8 this season. You'll also see here that's it's lost a little bit of movement. He's not just suddenly bad for an inexplicable reason, he's bad because he's thrown a slower, flatter fastball that can't even get over the plate reliably.

Some of that change has been suggested to be due to a change in release point. Directly below this, you'll see his final start in 2009 (against, by chance, the Brewers) up against his start Friday. You'll see the release point has dropped quite a bit lower this season. It's a small sample, but it lends some credence to the idea.

That's all there is to it: Rich Harden's been bad. And he has a long way to go in two-thirds of a season to be not bad, with little indication other than having been good a couple seasons ago indicating that will change. He's not just a pitcher throwing the same as he ever has and just running in to different results in a couple months, he's a pitcher throwing differently than he has in the past and it's not working well at all. Perhaps his brittle career has just ruined his chance to be effective.

What to do with him is a serious question, and I don't know what the answer is. On one hand, the Rangers can probably do better; even young Matt Harrison has been better in his short career than Harden has been this season. Whatever Harden is working on, the Rangers can't continue to allow him to hurt their chances by working on it in the major league rotation. On the other hand, he hasn't been much worse than Harrison, who gives the team another lefty in the bullpen, and certainly he was once better than Harrison probably ever will be, so I could have waited on DLing him (if he isn't actually injured) until Derek Holland is back, but something would have to had been done by at least that point.

I'm not sure what can be done with him to avoid just cutting bait, and I leave that up to discussion, but anything is probably better at this point than just allowing him to consistently damage the team with very, very poor outings. Getting Rich Harden was a very good idea, with very unfortunate results.

The Rest of the Rotation

Now just a few more notes that relate on the state of the Rangers' rotation. There seems to be cries of Scott Feldman having a remarkably disappointing, some even saying he's been almost as bad as Harden, and that the expected top of the Rangers rotation has been a terrible failure.

Really, though, Feldman hasn't been too much worse than last season and shouldn't be that much of a disappointment. Last season's ERA and win totals led to a lot of talk of Feldman as a top of the rotation starter, but that was greatly aided by a likely-unsustainable .275 BABIP. This year m the ERA has ballooned by more than a run, but the FIP has risen by just over .3 runs, and both last season and his tRA has had the exact same rise; and that's all right in line with his career rates. Feldman has been a little down from 2009, but there should not have been an expectation for him to be a real TORP this year, and he also hasn't been too bad this season, anyway.

Feldman is on-pace this season to be worth about 1.8-2.2 wins above replacement, which is pretty close to an average player. Over the last three seasons, that would consistently put a pitcher somewhere between about 75th and 95th among starters in the majors. With 30 teams, 60-90 is the range of the third tier of starters, so someone having Feldman's season should probably be considered in the range of a mid-range No. 3 starter or a strong No. 4. That's certainly worse than most people seemed to expect from Feldman, but it's absolutely not terrible, and expectations should have been closer to that than a No. 1.

The problem is not with Feldman being a major disappointment, but with the Rangers rotation. Feldman, thus far, has been the Rangers' third most valuable starter this season by FanGraphs' WAR, when he's probably only a mid-range No. 3 at best this year. A contending team probably wants at least a good No. 3 in the third spot, which is better than Scott Feldman has been so far. We have to hope Tommy Hunter ends up playing better than you'd expect from a pitcher in the back of the rotation and Derek Holland comes back healthy, as only five teams have gotten less from their starting pitching to date per FanGraphs.

This is obviously a quick-and-dirty way to define the rotation spots, but I think it's a good one. If you're interested, here's the average of the best, median and last starters to fit each tier (30 players) over the last three seasons:

You can use this chart to fit approximately what you should expect from each spot in the rotation, in terms of wins above replacement. A contending team probably wants to be at least in the top half of each spot.

Only four pitchers have really thrown enough to be looked at this season with much knowledge going forward. Two are discussed above, two below. As far as the rest, Hunter and Holland have already produced enough to be at least be passable back-of-the-rotation guys. Hunter, in a partial season, was a firm middle-of-the-rotation guy, and I think most believe Holland can at least, if healthy, be that as well. Feldman may be less than a contending team wants at No. 3, but if you have three guys who are at least solid #4s that helps make up for it. What the team gets in the time between Harden to the DL and Holland's next start is key.

There is some good news at the end of this. After shutting down a quality offense yesterday, Colby Lewis's tRA-based WAR this season is already at 2.1 and his FIP WAR prorates to double that by season's end if he gets 30 starts. C.J. Wilson's FIP and tRA exactly agree on him as a 1.6 WAR pitcher so far this season, putting him on a pace of ~4 wins above replacement this season. Neither is an ace, but if they can keep it up, the Rangers will have two top-of-the-rotation caliber pitchers this season, and while you should have at least one, having two is very, very valuable. So while many were expecting that out of Feldman and Harden -- right or wrong -- and didn't get it, few probably bet on getting it out of Wilson and Lewis. A very pleasant, and exciting, surprise.