The Mavericks And The Center Position

Share All sharing options for: The Mavericks And The Center Position

By now, most Mavericks fans realize the importance of Eric Dampier's contract. If you aren't familiar with it, the nuts and bolts are provided here by David Lord of Dallasbasketball.com.

In essence, it allows the Mavericks to become players in the 2010 Free Agent bonanza.  That's a good. It is assumed that once  Dampier is traded and released, he will come right back to the Mavericks, much like the Cavaliers did last year with Ilgauskas. But what happens if a team like the Knicks, after securing a free agent or two, comes after Dampier? Would an opportunity to play with a Lebron/Bosh combo entice Dampier? Of course it would. Dampier will draw interest from around the league when he becomes a free agent. The Mavericks would be foolish to assume otherwise, and if he decides to join another team? Well, that would be a bad.

Haywood,the Mavericks other option at center, is sure to draw a ton of interest this summer as well. With whispers of frustration with his lack of playing time and a rocky relationship with coach Rick Carlisle, re-signing him is no sure thing.  The Mavericks could have a completely different center duo next year. Let's look at the alternatives...

Of course, one option is to receive a center in any trade involving Dampier. Andris Biedrins anyone? But let's leave that alternative for another time...

Luckily, there are plenty of viable centers available in free agency this summer. The full list of available centers can be found here.

The best available center is Haywood, but we're operating under the assumption that the Mavericks are unable to sign him.

An interesting name that popped up yesterday was Tyson Chandler. Chad Ford reports that Chandler is considering  opting out from his contract with the Bobcats. Really? I know nobody wants to live in Charlotte, but it can't be 12.6million dollars bad. He won't get that on the open market. He'll probably demand a 7-10million dollar contract for multiple years. Chandler+Paul worked in New Orleans, why not Chandler+Kidd? It could work. But given the injury history, I'd pass.

Frank Isola of the New York Daily News had this tweet.

I'm told Shaq telling friends he could end up with Mavs.

Seemingly every year, Shaq is linked with the Dallas Mavericks. Shaq loves Dallas. He loves Mark Cuban. He loves Dirk. He loves Corby Davidson. At the age of 38, Shaq still put up a respectable 12pt/6.7rb/1.2blk line last year. He will probably demand part, if not all, of the mid level exception. I'd love to see Shaq here just because, he's SHAQ.  I'd stay away from Jermaine O'neal, as with Chandler, that injury history is scary. Brad Miller would be interesting, depending on the cost. I'd love to get him in here for somewhere around the veteran's minimum, but he'd probably command a million or two above that. Would you take Brad Miller for 3-4 million dollars? I think I would.

Solid Veterans that could be had for the veteran minimum. Ilgauskas would be the best option, but I'd have no problem with any of them as backups.

The other option is to scour the free agent market for a project, much like the Desagna Diop signing of a few years ago. Some names that would fit in here would be, Johan Petro,Ian Mahinmi, Louis Amundson and Kyrlyo Fesenko.

Many teams will be looking for centers this summer. Cleveland will have Ilgauskas and Shaq coming off the books, the Thunder need a center badly, the Heat need one and the Knicks will be in on everybody this summer.

In a perfect world, the Mavericks re-sign Haywood and Dampier, but if they don't? 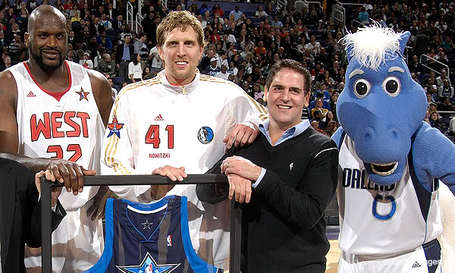