Expectations In The Brewers Series

Share All sharing options for: Expectations In The Brewers Series

The Brewers are bad. The Rangers are good. The Rangers should probably win the series. But, anything can happen. Here we will take a little look at not only the strengths and weaknesses of our opponents this series, but also what we can expect going in.

First, check out Chris's preview at Lone Star Ball, then come back here and click on the jump.

By the way, looks like the Brewers will be wearing old-school, Robin Yount-era throwback uniforms tonight. I very much approve of this. Do you know that glove is an M and a B for Milwaukee Brewers? Did I just blow your mind?!

First off, a quick look at the most valuable players for the Brewers this year (via FanGraphs WAR).

Yes, Corey Hart does wear his sunglasses at night.

Now then, a comparison of the likely lineups offensive performance in 2010 so far using weighted on-base average. (I'm using 2009 median pitcher offense for the Rangers). 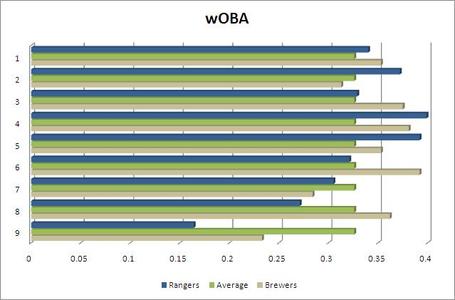 The Brewers offense is their strength, and they actually out-hit the Rangers at several spots in the order. Even with a pitcher going every 9th hitter, the Brewers eclipse the Rangers' 16 team weighted runs above average (wRAA) this season with 28. Very impressive. So they've got Texas beat when it comes to producing at the plate, though some of that is getting to face NL pitching. How about run prevention?

Here is the xFIP from the probable starters each game and the bullpen. 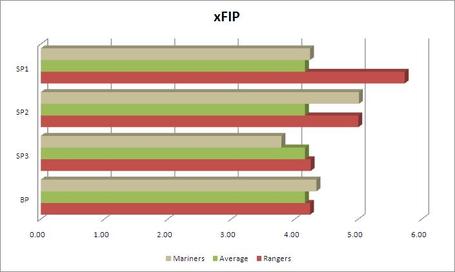 More advantage Brewers, unfortunately, but this, again, is in the NL. Yovani Gallardo has been, by far, the best pitcher that will be seen in this series. Game 2 is pretty close, but the league difference probably points towards the Rangers. The Rangers also have had a slightly better bullpen. That's largely thanks to Trevor Hoffman and his 1.3 leveraged wins below replacement already.

Finally, a picture of how the defenses have fielded so far this year. 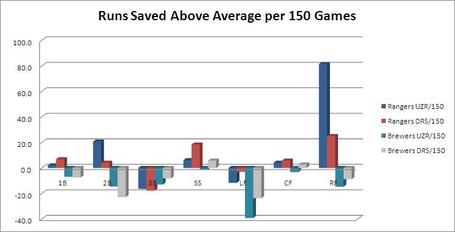 All sorts of small sample size here. Most hilarious, Vladimir Guerrero absolutely breaks the thing because of how well he's played in very limited time. I left him in for the comedy. This, though, is where the Rangers have a huge advantage, as most probably expected coming in to the year. 5/7 positions are above average for the Rangers, 5/7 are below average for the Brewers, with Carlos Gomez being average when the difference is split. The only position the Brewers win at is third base, where Michael Young makes nightly mistakes, but the Brewers have one of the few third sackers that can actually give him competition.

As a team, using DRS and UZR, the Brewers have been anywhere from 12 to 48 runs worse defensively than the Rangers, with the likely story being somewhere around 25. That's a huge, huge, huge difference. This series will be a small example for what a difference defense makes.

Now that we have a glimpse of the teams, we can get ourselves some projection. The amazing Steve Sommer has been gracious enough to hand me the reigns of his deep system for predicting short series using the various components that will be showing up. I intend to learn more from him and tinker with some things in the future, but many, many thanks to him for helping out with this. This should be less haphazard than when I had been doing, but it's the same idea. This mostly uses the same components you've seen above, but I'll be going with park-adjusted wOBA and Sean Smith's defensive projections, which should be a little more accurate for what will happen.

And this is actually a little concerning. Putting a pitcher on the Rangers and having Feldman and Harden both going in a series with Gallardo starting for the other side puts their expected runs for the Rangers at about 29 runs vs. about 28 for the Brewers. That's a pythagenpat record of .525 in a vacuum, but on the road it's more like .485. So below .500. Here's what Steve's simulation says for the Rangers over the three games. 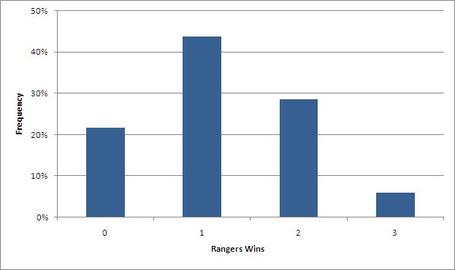 Well that's no good. It only has the Rangers winning the series about 35% of the time. Sad. BUT this is a weird series, and these projections are missing one thing: the Rangers have had to play against the AL, the Brewers the NL. That definitely skews things, and, admittedly, this is probably not the best point in the season to break these out. I just wanted to put my new toy to use. The AL is a much better league and that inflates the Brewers and deflates the Rangers. At this point, I can only estimate, but I believe the best estimates I've seen of the difference between leagues is the average AL team being about five wins better over 162, or a roughly .03 boost in record, which would put the Rangers as more likely to win the series.

I'm still fairly confident going in. I think the Rangers have a good chance to win, but this should serve as a little bit of caution. Even bad teams always have a chance, a lot of the Rangers offense is thanks to having a great DH, being on the road is a definite disadvantage, and, most importantly, the Brewers are getting the exact pitching match-ups they could have hoped for.

Go Rangers, but don't just expect to walk over even a basement dweller.