Click here for World Cup Preview, Pt. 3 - Groups A and B

So, we're a few hours away from the World Cup kicking off in South Africa.  I acknowledge that there's no way to wax poetic about the popularity of soccer on a site read by (primarily) Americans without sounding condescending to some.  I'll just point out that 5.6 billion people tuned into matches across 54 global markets, and an average of 93 million people watched each match.  It's kind of a big deal.

This will be a series of previews for each group (two at a time) with a more detailed analysis on the teams that are expected to contend.  The problem with the World Cup is that formations and squad selections for some teams are shrouded in secrecy, so I may end up being quite off by the time June 11th rolls around.

We continue with Groups C and D, and the game everyone's looking forward to:  USA vs. England.  I'll keep the format of the other group previews and post a more detailed match preview of the big match on Friday afternoon.

Note:  For all who aren't familiar with soccer in Africa, those horrifically annoying horns are called Vuvuzelas.  They're a local tradition at soccer games and I'm pretty sure they'll be linked to 50% of the murders committed worldwide between June 11th and July 11th. 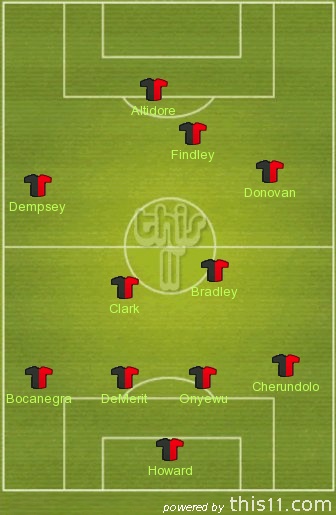 Tim Howard would start in goal for England and a lot of other teams in this competition.  His form at Everton has been nothing short of exemplary and his shot stopping abilities have saved the US on multiple occasions.  Michael Bradley is an under-the-radar (maybe not here, but globally) player who has developed into one of the most consistent performers on this US side.  His role within his father's formation is more reserved than the role he plays for Munchengladbach, which sees him pushing forward with more regularity, but he's a steady influence in the center of the US midfield.  The US also boasts a healthy amount of pace in attack, with Donovan and Dempsey on the wings and Findley in support of Altidore (presumably...I'm not sure what Bradley will end up doing).  Donovan and Dempsey are both coming off strong seasons for Everton and Fulham respectively.  Donovan's strong play for Everton has helped silence critics who questioned his ability to play at the highest club level.

The US defense is a massive question mark.  Noone really knows how healthy Oguchi Onyewu really is, although all signs point to him starting against England.  Either way, he didn't play at all for Milan due to his patella injury in October and will inevitably be rusty.  Both full-back positions are areas of weakness.  Going into the year, Jonathan Spector was the presumed starter at right back.  However, he had an absolutely abysmal season for West Ham, seemingly getting skinned by any pacy winger he tried to defend 1-on-1.  Bradley played him at RB against Turkey to disastrous effect, and ended up bringing on Steve Cherundolo to stop the bleeding.  Cherundolo is pacier than Spector and at this point appears to be a much safer choice...which isn't saying much.  Bocanegra has been the captain of the side for several years now, but his natural position is as a centerback, and it's yet to be seen if he's capable of handling the pacy wingers (see Aaron Lennon) in this group.  I would talk about Findley and his lack of experience and trouble in front of goal, but I'm not entirely sure he'll start. 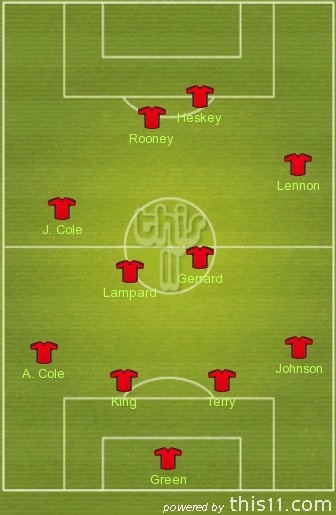 After Manchester United sold Cristiano Ronaldo to Real Madrid last summer, there were major questions as to who would replace a 30-40 goal scorer in their lineup...enter Wayne Rooney.  Rooney had by far his most prolific season as a professional, scoring 34 goals in 44 appearances.  Most importantly though, he demonstrated the ability to play as a lone striker (a false nine, in reality).  This gives Capello many more options once Gareth Barry returns to health, including the most intriguing one of playing Gerrard in his favored position slightly behind the striker, and switching to a 4-5-1 formation (or some variation of it).  This iteration of Rooney combines deadly finishing, creativity, a wide passing range and tireless work ethic, to form the best player in this group and one of the best in the tournament.  Frank Lampard is coming off a typically strong season for Chelsea, and while he operates in a thankless role for England (having to drop deeper to accommodate Gerrard), he always represents a threat...particularly when Barry is present to cover for him.  Although there are questions regarding Ledley King's health (in particular his ability to play two games in a week), the King/Terry partnership is rock solid on paper.

Glen Johnson is magnificent going forward, but his defensive ability is dubious at best.  When called on to defend, he's prone to lapses in concentration that have spelled disaster for him in the past.  If there's an area of the pitch that teams playing England should target, it's that right side of defense.  Gareth Barry will be unavailable for the first game, leaving Capello with the choice of playing an out-of-form Carrick or going with a Lampard-Gerrard partnership that has never worked.  All signs point to him playing Lampard-Gerrard, which forces both men into positions they don't favor.  Lampard has to play much deeper than he's accustomed to and cannot make the darting runs into the opposition penalty box that he thrives on. Meanwhile, Gerrard, who plays just behind the striker for Liverpool, must also return to a deeper midfield position.  Other problems include the inexperience and error prone nature of Rob Green and Emile Heskey's lack of usefulness outside of being a target man.  This is by no means an airtight team.

Group D (The Group of Death)

Note:  I could preview all of these teams, because all of them have a chance to make it to the next round, but I'll stick to the two that I think will progress.  If I receive requests for Ghana or Australia, I'll add them before the tournament starts. 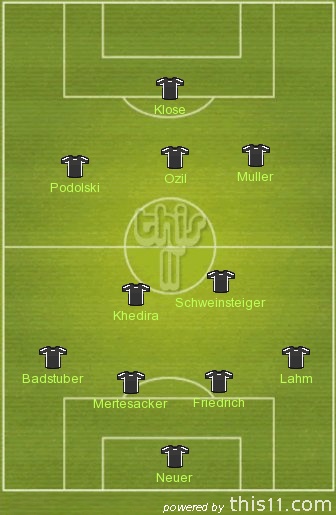 The 2010 German side is considerably younger than previous constructs and they're missing their captain and most visible player:  Michael Ballack.  However, they still possess their typically imposing defense and are impeccably organized under Jogi Low.  Ballack's absence shines the spotlight on Sebastien Schweinsteiger, who is now looked upon to run Germany's midfield.  Schweinsteiger generally sits deep, in an almost holding role, and will be tasked with dictating the tempo for his team.

Two of Germany's most important players are also two of their youngest.  Mesut Ozil (21) is coming off a season that has some who follow the Bundesliga calling him the best player in the league.  Ozil is an attacking midfielder with stunning vision, and he will be called upon to serve as the creative link between the three strikers.  Thomas Muller (20) is arguably the most in-form German striker and will need to be sharp to offset the struggling duo of Lukas Podolski and Miroslav Klose.

Germany's strikers go into this competition completely out of form.  Klose and Podolski scored a combined 8 goals in 65 appearances in the 2009-10 season.  Mario Gomez, the 30mm euro signing for Bayern, has been hugely disappointing and will start the World Cup on the bench for Germany. 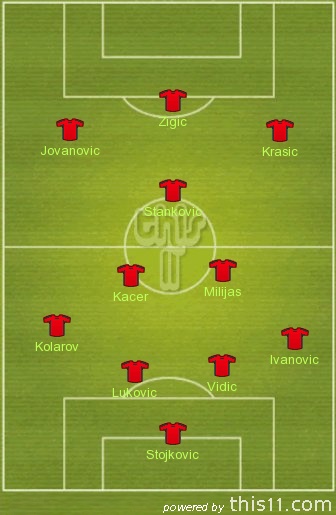 Look at that defense.  It's a fearsome back 4 that combines a exciting young leftback (Kolarov) with three hardened natural centerbacks.  Factor in two holding midfielders in Kacer and Milijas and you can see why this is a side that only allowed 8 goals in qualification play.  Dejan Stankovic is coming off of a treble winning season for Inter and will reprise his role as the creative midfielder in the Serbia squad.  Milos Krasic and Milan Jovanovic are both wing players with tremendous flair and both will look to deliver crosses into the box for 6'8" Nikola Zigic, a Peter Crouch type player whose aerial threat is complemented by surprising technical ability.

Serbia has a tendency to play too defensively, thereby struggling to score goals, and a formation with two holding midfielders seems to be overkill.  There are rumors that Bilic will implement a more standard 4-4-2, with Kacer being sacrificed for Marko Pantelic, who would serve as Zigic's strike partner.