Who does America think will win the World Series? Tell me SportsNation (ESPN).

According to the vote on the main MLB home page on ESPN.com (http://espn.go.com/mlb/), the Rangers are the favorite. I'm guessing it's partially because the Rangers had to go through both AL East giants to get to the World Series and partially because the Rangers are just plain like-able. They play the game like we would play it. They play the game like I play softball on Wednesday nights, during the summer time, in Grapevine, D league, division 2. Drop the Antler on em. Drop the Claw on em.

As far as I'm concerned, the Rangers have the talent, team unity and the momentum to win this thing.

I'll get through today knowing that at least 49 states have the same opinion that I do. 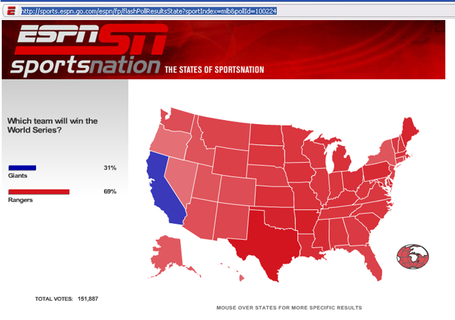